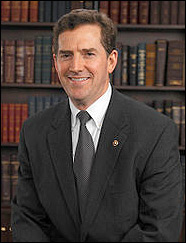 The unexpected announcement that Sen. Jim DeMint (R-SC) will resign his seat in January to become president of the Heritage Foundation yields two major surprises. First, is the timing of his departure. Though Mr. DeMint had pledged to only serve two senatorial terms upon his original election, he still has four years remaining in his allotted tenure. Second, the big winner lurking behind the scenes in this unfolding scenario could be South Carolina’s senior senator, Lindsey Graham.

DeMint has been a key conservative leader since his original election to the state’s 4th Congressional District in 1998. That year he pledged to serve only three terms in Washington. During DeMint’s final year in the House, Sen. Ernest “Fritz” Hollings announced that he would not seek re-election, thus providing the outgoing congressman an opportunity to seek an open Senate seat in 2004.

With the Senate moving further left after the 2012 election results, the opportunity of helping to craft and rebuild the conservative movement outside Congress by running one of the premier right-of-center think tanks proved more alluring to DeMint that toiling in an even smaller minority.

Sen. Graham factors into this scenario differently. Facing the voters in 2014, speculation has been prevalent that he would soon receive a primary challenge from the right, one that could be serious since the senator has strayed much further to the middle of the ideological spectrum than the average South Carolina Republican primary voter. Now that the DeMint seat will also be up for election in 2014, much of the attention will be drawn away from Graham and onto who will become DeMint’s replacement. Many of Graham’s potential challengers will likely find an open seat or running against an appointed incumbent to be a more appealing option.

Under South Carolina election law, Gov. Nikki Haley (R) will appoint an interim senator until the next regular general election in 2014. The winner of that election serves the remainder of DeMint’s term, meaning said individual will stand for a full six-year term in 2016. Haley could appoint someone who will run for the long term or choose to select a caretaker – an individual agreeing only to serve for the 113th Congress and not be an election candidate in 2014.

In either event, Haley has many people from which to choose. Republicans control all eight constitutional offices in addition to the governor’s post, along with having six members of the US House of Representatives. Still others, such as former attorney general and state Republican Party chairman Henry McMaster, are ex-statewide officials. Reportedly, McMaster would not be interested in a caretaker appointment. Former South Carolina Republican Party chairman Katon Dawson is reportedly interested in being considered. Former US Ambassador to Canada David Wilkins is also being mentioned as a potential appointment candidate.

Who eventually becomes the interim senator may depend on what Haley sees as her own future. The option of resigning as governor and having Lt. Gov. Glenn McConnell (R), after he ascends into the governor’s office, appoint her to the Senate is a non-starter. Governors who have tried such schemes have always been pummeled at the polls in the next election. If she has interest in the seat herself, she could appoint a person who will not seek election in 2014, and then she could run in the open seat. Haley’s own position will be coming up for election also in that year, so the governor would have to choose between the two offices.

The senior Republican in the congressional delegation is Rep. Joe Wilson (R-SC-2), and his son, Alan, is the state’s attorney general. Rep. Tim Scott (R-SC-1), believed to be Sen. DeMint’s favored choice to succeed him, would become the state’s first African-American senator since Reconstruction. Should the governor choose a member of the congressional delegation, a succeeding special election would then be held to replace the newly appointed senator.

Since the DeMint announcement caught the political community by surprise, it will take several days to sort out. The jockeying for the Senate appointment will soon begin, however, and Gov. Haley will be forced to act quickly since DeMint will be leaving office in early January.

The announcement also means that 34 Senate elections will be contested in 2014 instead of 33.