The CD did flip to the Democrats, however, the last time a special congressional election was held here. Kathy Hochul, now New York’s lieutenant governor, won the seat in 2011. She was then subsequently defeated in the 2012 regular election by Collins, however.
END_OF_DOCUMENT_TOKEN_TO_BE_REPLACED

END_OF_DOCUMENT_TOKEN_TO_BE_REPLACED 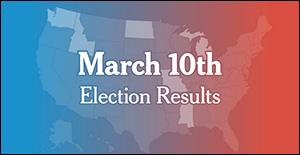