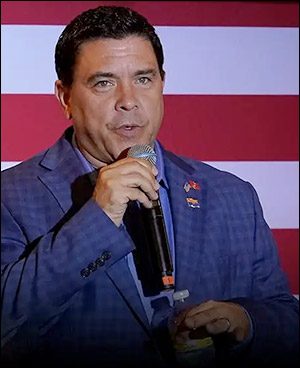 AZ-4: Cooper to Return — Phoenix area restaurant owner Kelly Cooper (R), who lost in November to Rep. Greg Stanton (D-Phoenix), 56-44 percent from a district that the FiveThirtyEight data organization rates only as D+1, said late last week that he will run again in 2024. With Congressman Stanton eschewing a US Senate run, the chances are good that we will see a re-match congressional race here next year. In 2022, Cooper upset GOP establishment favorite Tanya Wheeless in the Republican primary with a 28-25 percent win within a field of five contenders.

CA-30: Field to Replace Schiff Again Grows — Though California Rep. Adam Schiff (D-Burbank) has yet to announce that he is running for the Senate, it is becoming a foregone conclusion that he will officially declare his candidacy when Sen. Dianne Feinstein (D) publicly confirms her retirement. We now see a fourth Democratic candidate coming forward to run in what they believe will be an open 2024 congressional race.

Actor Ben Savage (D), brother of actor Fred Savage, who has appeared in film and television in roles from 1989 to the present, made public his intention to enter the 30th District congressional field. Already in the race are Assemblywoman Laura Friedman (D-Burbank), Los Angeles Unified School District board member Nick Melvoin, and businessman John Bocanegra. CA-30 is a safely Democratic seat that will likely advance two Democrats from the top-two jungle primary format.

IN-3: First Open Seat Potential Candidate Emerges — Responding to four-term northern Indiana Rep. Jim Banks (R-Columbia City) announcing for the open Senate race, the first major potential US House candidate has filed an exploratory committee. State Sen. Andy Zay (R-Huntington) confirmed that he is testing the waters for a congressional run but has not made any final decision about entering the open contest. A crowded Republican field is expected in a seat where the GOP nominee will have a major advantage in the general election. The FiveThirtyEight data organization rates IN-3 as R+34.

The current Resident Commissioner, Jenniffer Gonzalez-Colon, is a member of the New Progressive Party (PNP), which is closely associated with the Republican Party. Yesterday, she received a challenge for the 2024 election from attorney and former gubernatorial aide Pablo Jose Hernandez Rivera of the Popular Democratic Party (PPD), which is closely aligned with the mainland Democratic Party.

Gov. Reeves polled close in the 2019 election, but in the end won a 52-47 percent victory over four-term Attorney General Jim Hood (D). While his job approval rating, according to the Siena poll, is 48:45 percent positive to negative, his personal rating is an upside down 40:48 percent. It is unusual to see a personal rating register more negative than a job approval score.