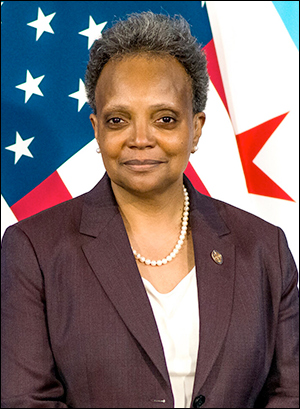 Chicago: Mayor Lightfoot Drops to Third in New Poll — An M3 Strategies poll for News Channel Fox32 in Chicago (Dec. 11-13; 440 Chicago likely municipal election voters; SMS web to text) finds Chicago Mayor Lori Lightfoot (D) dropping to third place in anticipation of the Feb. 28 non-partisan jungle primary election. In this system, only the top two finishers would advance to an April 4 runoff election from the field of nine contenders if no individual receives a majority from the initial vote.

The M3 ballot test result sees US Rep. Jesus “Chuy” Garcia (D-Chicago) leading the field at 28 percent support with former Chicago Public Schools CEO Paul Vallas in second place with 19 percent preference. Mayor Lightfoot is in third position posting only 14 percent backing for a second term. The mayor points out that she was at one percent in polling this time four years ago.

Ohio: Former Senate Candidate Preparing Another Run — State Sen. Matt Dolan (R-Chagrin Falls) who placed third in the 2022 Republican US Senate primary, finishing nine percentage points from the lead, is reportedly building another campaign operation to this time challenge Sen. Sherrod Brown (D) in the next election. Dolan, a minority owner of the Cleveland Guardians baseball club and chairman of the state Senate’s Finance Committee, spent more than $11 million on his 2022 campaign, almost $8 million of which came from his personal finances. He began the race as a minor candidate but finished strong, making himself a viable contender as the primary campaign drew to a close.

Dolan is likely to be a stronger GOP nomination contender in 2024 in what is likely to be a crowded primary, but would have a tough run in the general election against Sen. Brown, who will be running for his fourth term after originally being elected to the statewide post in 2006. Prior to his tenure in the Senate, Sen. Brown served seven terms in the US House and eight years as Ohio’s Secretary of State.

Mississippi: Potential GOP Primary Challenge Brewing — The Politics1.com site is reporting that GOP Secretary of State Michael Watson is polling the state to test his chances against Gov. Tate Reeves (R) in the upcoming 2023 Republican gubernatorial primary. In 2019, Reeves, then the state’s lieutenant governor, defeated former state Supreme Court Associate Justice Bill Waller Jr., 49-33 ;ercent. Waller was a 22-year veteran of the high court, half of which he spent as Chief Justice.

Reeves would go on to win the general election against four-term Democratic Attorney General Jim Hood by a tighter 52-47 percent count. In a state where the GOP is the dominant party, the Republican primary is likely to be Gov. Reeves’ toughest re-election test next year.

Against former governor and 2022 US Senate candidate Pat McCrory, Lt. Gov. Robinson would lead 60-21 percent. If ex-vongressman and 2022 US Senate candidate Mark Walker (R) were his opponent, Lt. Gov. Robinson would lead by a whopping 58-8 percent. Finally, if state Treasurer Dale Folwell were Robinson’s Republican primary opponent, the lieutenant governor would lead by an even larger 60-6 percent margin.

Differentiators did not test the candidates in a multi-candidate format. None of the individuals paired with Robinson have indicated that they would run for governor. In fact, after this year’s Senate primary, McCrory indicated that he would not again pursue public office. The polling firm also did not test a potential Democratic field.