Michigan: First Two Announce — The first two candidates came forward to announce their intention to run for what will now be an open Michigan US Senate seat in 2024. Former state Rep. Leslie Love (D) and attorney Jacquise Purifoy (D) both declared their candidacy yesterday. These are the first in what is expected to be a long list of contenders for both parties. Last week, Sen. Debbie Stabenow (D) announced that she will not seek a fifth term in 2024.

One person who will not likely be in the field is Secretary of State Jocelyn Benson (D), who indicated yesterday that she will continue to serve in her current position. 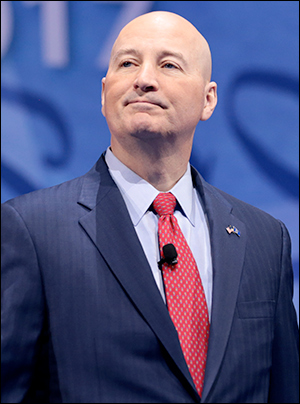 Nebraska: Officially Vacant — Sen. Ben Sasse (R) has officially resigned his seat in order to assume his new duties as president of the University of Florida. This means new Gov. Jim Pillen (R) will now be able to name a replacement. Odds are strong that he will choose former Gov. Pete Ricketts (R). The announcement could come as early as today.

Once a replacement is chosen, the individual will then come before the voters in a special 2024 election, run concurrently with the general cycle, to fill the balance of the unexpired term. The seat next comes in-cycle for a full six-year term in 2026.

AZ-1: Rep. Schweikert Already Draws First Opponent — Veteran Rep. David Schweikert (R-Fountain Hills) had another close call in the 2022 election, winning a seventh term with just 50.4 percent of the vote in a newly configured district that the FiveThirtyEight data organization rates as R+7. His opponent was first-time candidate Devin Hodge (D), a communication consultant who may well run again.

Yesterday, however, orthodontist Andrew Horne (D) became Rep. Schweikert’s first 2024 challenger with his announcement of candidacy. We can again expect this race to be competitive in two years. A crowded Democratic field is expected to form.

Louisiana: Lt. Gov. Shakes Up Field — In a surprising move, Louisiana Lt. Gov. Billy Nungesser (R) changed his mind about running for governor and instead yesterday announced his intention to seek re-election later this year. Before, Nungesser said he would run for governor if Sen. John Kennedy (R) didn’t. After Sen. Kennedy declined to enter the race, it was assumed that Nungesser would immediately jump and become one of the leading contenders. Several others were declaring for the lieutenant governor role with the understanding that the seat would be open.

With Nungesser’s decision to stay put, it appears that attorney general and former Congressman Jeff Landry (R), someone Nungesser described as “not a good person” when previous discussion arose about his intentions regarding the governor’s election, becomes the front runner to replace term-limited incumbent Gov. John Bel Edwards (D).

As a result of the Nungesser decision, state Treasurer John Schroder (R) then entered the governor’s race. The leading Democrat to date is Transportation Department Secretary Shawn Wilson. Candidate filing does not end until Aug. 10 for the Oct. 14 jungle primary, so the fluid contender field can still greatly change. If no candidate receives majority support in this first election, the top two finishers will runoff on Nov. 18. 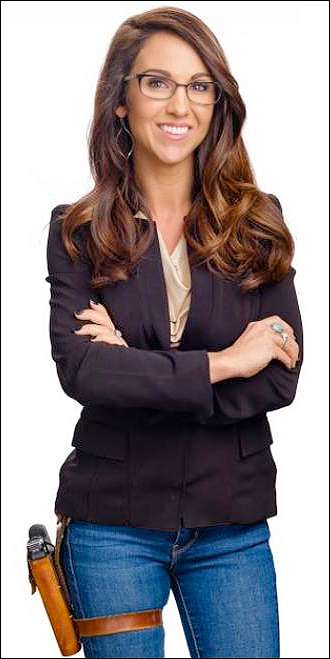 Speaker: A Dive Into the Numbers — The internal US House voting process that elected California’s Kevin McCarthy as Speaker Friday night on the 15th roll call was arguably even closer than the final 216-212-6 tally suggested.

The two closest congressional elections, those of Reps. Lauren Boebert (R-CO) and John Duarte (R-CA), both would have affected the Speaker race outcome had the pair not won their tight November electoral contests.

Though Boebert supported other members on the first 13 roll calls, her “present” vote on the last two helped make the difference in McCarthy’s marathon campaign for the Speakership. Rep. Boebert won her western Colorado re-election campaign with only a 546-vote margin. Duarte was victorious with a similar 564 vote spread in central California. Combined, the aggregate 1,110 vote victories ultimately provided what McCarthy needed to finally reach majority support.

In all, 25 November US House races were decided by less than 10,000 votes apiece. Of those, Republicans won 15 and Democrats 10. In 15 of these 25 elections, we saw the winning candidate flip the district from the previous party’s representation to his or her own.

It is likely that most, if not all, of these 25 closest 2022 contests will become targeted races in the 2024 election cycle. Throughout the long election cycle, we will be paying particular attention to the 10 districts where the electorate voted opposite of the prognosticators’ pre-election calculation.

The FiveThirtyEight data organization, for example, rated all 435 House districts using past election trends, voter registration, and other statistics to formulate a point spread favoring a nominee of one party or the other.

The following 10 members over-performed their party’s projection and won a close contest in a seat that was expected to favor the opposite party’s nominee:

Redistricting may very well be back on the table for the 2024 congressional cycle, however. Irrespective of the US Supreme Court deciding the Alabama racial gerrymandering and the North Carolina partisan gerrymandering and legal jurisdiction cases before the end of June, we can expect redraws occurring in certain states.

The legislatures will likely redraw interim court-mandated maps in New York, North Carolina, and Ohio. Based upon a recent federal three-judge court ruling, South Carolina has been ordered to produce a new congressional map by March 31. The impending SCOTUS rulings could force Alabama, Illinois, Louisiana, and North Carolina (if not already done so by the time the high court rules) to change their maps.

The redraws would potentially help Republicans in Illinois and North Carolina, and Democrats in Alabama, Louisiana, New York, and South Carolina. The Ohio situation is unclear, at least for now.

With impending map changes coming in the aforementioned states, and possibly several more depending upon just how far-reaching the future SCOTUS decisions prove, we could again see a large number of seats falling into the competitive realm. This, in addition to the aforementioned 25 close likely targets from the previous election cycle.

Those members are listed in their entirety below: 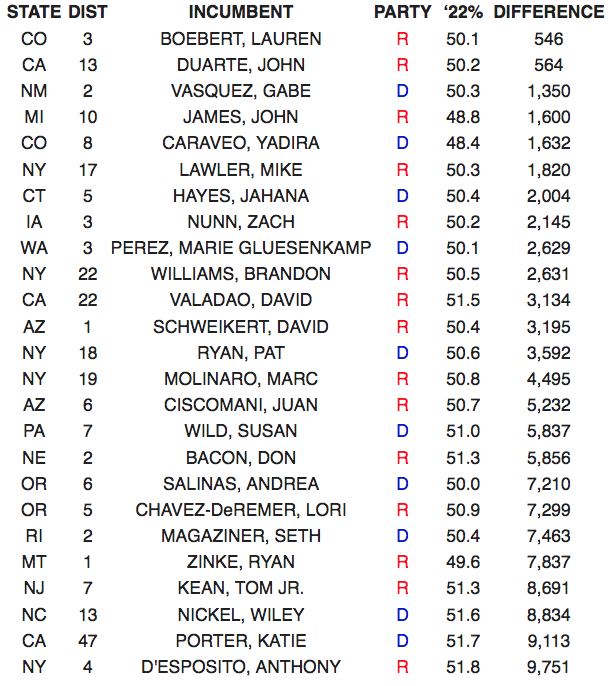 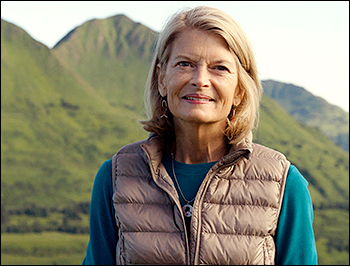 Alaska: Sen. Murkowski Re-Elected — Over the Thanksgiving break, we saw several more races called. The complete results came in Alaska where the final tabulations, including the Ranked Choice Voting (RCV) rounds, were released and contests decided.

As expected, Sen. Lisa Murkowski (R) was re-elected after nipping former State Administration Director Kelly Tshibaka (R), 43.4 – 42.6 percent in the aggregate vote, a margin of 1,914 votes. In the first RCV round, with fourth place finisher Buzz Kelley’s (R) votes being distributed, the race became even tighter, with Sen. Murkowski’s lead reduced to only 44.5 – 44.3 percent, a spread of just 339 votes.

The final result was easily predictable, and one could argue Sen. Murkowski really won her re-election when people voted to change the state’s election system in 2020. Initiated with support from the senator’s political organization, the hybrid jungle primary/Ranked Choice Voting system allowed Sen. Murkowski to skip what was her most vulnerable election, a partisan Republican primary. With four people now automatically advancing into the general election, the partisan nomination phase within the traditional election cycle was in effect eliminated. In 2010, Sen. Murkowski lost the Republican primary, but was re-elected when she won a write-in Independent campaign in that year’s general election.

The first round of Ranked Choice Voting, which eliminated distant fourth-place finisher Chris Bye (Libertarian), almost put Peltola over the top. In this round, against both Palin and Begich, Rep. Peltola scored 49.2 percent of the adjusted vote. This result meant eliminating Begich, who was the third-place finisher. The third RCV round easily went to Rep. Peltola, who defeated Palin on a 55-45 percent tabulation. The Peltola victory increases the House Democratic Conference to 213 members as compared to the Republicans’ 221 with one California race remaining outstanding.

CA-13: The Last One Outstanding — We now have 434 US House races projected and the final partisan division count comes down to the end result from California’s new 13th Congressional District in the Fresno area. This post-election period could go on for some time.

The aggregate count, with a projected 96 percent of the votes recorded, although these estimates have not proven particularly reliable throughout the California counting process, gives Republican agri-businessman John Duarte a 593-vote lead over state Assemblyman Adam Gray (D-Merced). The county with the largest outstanding vote at a 90 percent estimated recorded figure, is Stanislaus, which slightly favors Gray.

Depending upon this last outcome, the Republican House majority will be either 221-214 or 222-213. Another Speaker vote for California Republican Kevin McCarthy could also be critical in relation to how that internal race unfolds on Jan. 3.

We can expect further days before a preliminary count is revealed, and it is likely we will see a long period of vote challenges from both sides prior to final certification of a winner. The California election certification deadline is Dec. 16.

Alaska: Gov. Dunleavy Re-Elected Outright — One race that did not need a Ranked Choice Voting round was the Alaska governor’s contest. Incumbent Gov. Mike Dunleavy (R) won a second term in the aggregate count, scoring 50.3 percent of the vote against three other candidates.

In a distant second place was Democratic former state representative Les Gara who posted 24.2 percent of the vote, while former Gov. Bill Walker, again running as an Independent, followed. The latter man recorded 20.7 percent of the aggregate popular vote. In the final general election qualifying position was Republican former Kenai Borough Peninsula Mayor Charlie Pierce who managed to secure only 4.5 percent of the vote.

Gov. Dunleavy, who faced an aborted recall effort early in his tenure, is the first re-elected Alaska chief executive since Democratic Gov. Tony Knowles won a second term in 1998.