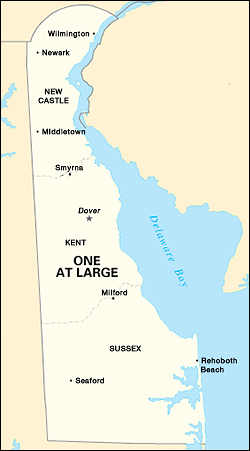 Sept. 7, 2018 — The First State voters chose their nominees last night, the 47th state to do so in the current election cycle. The nominating election was basically a non-event despite media reports attempting to hype the challenger’s chances. Sen. Tom Carper (D) scored almost a 2:1 victory over socialist Democrat Kerri Harris. Sen. Carper, running for a fourth term, posted a 65-35 percent win from a turnout of just over 83,000 Democratic voters.

The three-term incumbent will now face the GOP winner from last night, Sussex County Councilman Rob Arlett who thrashed two minor GOP candidates with 67 percent of the vote. The general election is not competitive and Sen. Carper will easily win a fourth term in November.

In the House race, freshman Rep. Lisa Blunt Rochester (D-Wilmington) was unopposed for re-nomination. In the Republican primary, floral contractor Scott Walker scored a 53-47 percent win over teacher and actor Lee Murphy. As in the Senate race, this House campaign will be non-competitive and Congresswoman Rochester will easily win a second term on Nov. 6.

At this early point in the campaign cycle, it appears that as many as 13 races, nine Republican-held and four Democratic, should be rated as highly competitive. The most vulnerable of all incumbents standing for re-election are governors Rick Scott (R-FL) and Tom Corbett (R-PA), who trail potential Democratic opponents in all surveys. The most vulnerable Democratic seat is the Arkansas open (Gov. Mike Beebe, D, is ineligible to seek a third term), where former GOP Rep. Asa Hutchinson (R-AR-3) consistently polls ahead of ex-Rep. Mike END_OF_DOCUMENT_TOKEN_TO_BE_REPLACED

Wisconsin Gov. Scott Walker (R) handily repelled his recall challenge with a 53-46 percent victory over Milwaukee Mayor Tom Barrett (D) with a turnout larger than the 2010 midterm vote that originally elected him. The extraordinary outcome yielded a voter participation rate exceeding 2.5 million voters. In the 2010 midterm election, the total turnout was just under 2.2 million. Walker won that election over Barrett 52-46 percent, so he even slightly increased his margin of victory, too. The 2008 presidential election year turnout saw 2.9 million Wisconsin voters going to the polls, putting the size of the recall participation rate into perspective.

In a separate race, even though the two ran as a team in the midterm, Lt. Gov. Rebecca Kleefisch (R) also survived her recall, 53-47 percent. Three of the four Republican state senators who were facing recalls also won, but the lone Democratic victory does flip majority control by one vote. Much more in-depth analysis will be forthcoming about this race in the coming days.

In New Jersey’s new 9th Congressional District, in what was projected as a close contest between paired incumbents Steve Rothman (D-NJ-9) and Bill Pascrell (D-NJ-8), recorded the exact opposite result. Veteran Rep. Pascrell, trumpeting his backing from former President Bill Clinton but long thought to be the underdog here, scored an impressive 61-39 percent victory over Rep. Rothman. This is especially stunning considering that two of the three Democratic county party structures officially endorsed Rothman. Pascrell rode a huge turnout and overwhelming 92 percent loyalty factor from his Democratic voting base in Passaic County, thus leading to his strong victory. He will now cruise in the general election.

Today, Gov. Scott Walker (R) faces Wisconsin voters to determine whether he should be recalled from office. All late polling shows a very close race, with Walker right at the 50 percent mark and his Democratic opponent, Milwaukee Mayor Tom Barrett, hovering in the high 40s. Clearly, this race will come down to favoring the side that does the best job of turning out its votes.

In New Jersey, 9th District Democratic voters are forced to choose between incumbent Reps. Bill Pascrell (D-NJ-8) and Steve Rothman (D-NJ-9). The winner of today’s vote will claim the seat in the November general election. A tight finish is forecast. New Jersey lost a district in reapportionment, which forced these two incumbents to fight for one seat.

Turning to Iowa, Rep. David Loebsack (D-IA-2) is the prohibitive favorite to repel a primary challenge from state Sen. Joe Seng. The state legislator appears strong on paper but is making little effort to secure the congressional nomination.

But the state with the most elections is California, where a new primary election law is changing the face of Golden State politics. Today, the top two finishers in every district election will qualify for the November vote regardless of political party affiliation. This will likely lead to at least seven Democrat vs. Democrat general elections and possibly two Republican vs. Republican. See yesterday’s post for a breakdown of how the races look going into the election there.

Tuesday’s primaries have come and gone, but three key points need to be added:

• First, there’s the North Carolina run-off schedule. Because US House races are involved, the MOVE Act (Military and Overseas Voter Empowerment Act) is invoked, which places time restraints upon official election notice; the election date now becomes July 17 instead of June 26. This affects Republican secondary elections in Districts 8 (Richard Hudson vs. Scott Keadle), 9 (Robert Pittenger vs. Jim Pendergraph) and 11 (Mark Meadows vs. Vance Patterson). All 13 NC congressional districts nominated Democratic candidates on Tuesday, so they have no run-off contests.

• Second, Charles Malone, the Democratic nominee in the new North Carolina District 13, may withdraw from the race due to health reasons. Mr. Malone is indicating that, should the party have a more able candidate, he would consider stepping aside. The Democrat is a decided underdog to former US Attorney George Holding (R) in what will likely be a Republican conversion seat. Holding won the Republican nomination outright on May 8. Rep. Brad Miller (D) decided to not seek re-election rather than run here.

• Third, a possible indication of what may happen in the June 5 Wisconsin governor’s recall election occurred Tuesday night. Despite Gov. Scott Walker being on the primary ballot against one minor opponent (Walker received 97 percent of the vote) and his renomination being a foregone conclusion, he received almost as many votes as all of the Democratic candidates combined. Walker totaled 626,538 votes compared to 670,278 cumulatively among all five Democrats. This is a clear sign that the governor has a strong base, which is critically important in a low-turnout recall election format.