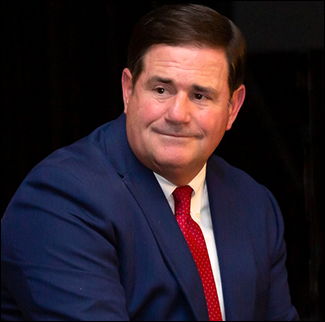 Arizona: Ex-Gov Out; Gubernatorial Candidate Considering — Upon exiting office at the end of his two full terms, Arizona Gov. Doug Ducey’s (R) name continues to be mentioned prominently as a potential US Senate candidate. The now-former governor again confirmed, however, that he is not even considering running for the federal post in 2024. Another potential Senate candidate who is considering making a run is 2022 gubernatorial candidate Karrin Taylor Robson (R), who lost to former news anchorwoman Kari Lake, 48-43 percent, in the Republican gubernatorial primary.

Sen. Kyrsten Sinema (I) has not yet announced her re-election intentions but appears to be preparing her Independent run in a three-way race. Reps. Ruben Gallego (D-Phoenix) and Greg Stanton (D-Phoenix) are actively assessing their individual chances in what could become a seriously contested Democratic primary. Again, the Arizona Senate race will be one of the focal points of the 2024 election cycle, but this time will feature a unique procedural contest.

Sen. Mike Braun (R) is running for governor. None of the aforementioned has officially declared their intention to run for the Senate, but all admit to at least be considering the possibility of launching a campaign.

NY-17: Former Incumbent May Return — Democrat Mondaire Jones, who won the 17th Congressional District in 2020 only to depart for a post-redistricting New York City seat in 2022, says he is considering returning to Westchester County to challenge Rep-Elect Mike Lawler (R-Pearl River) in 2024. Jones did not want to oppose then-Rep. Sean Patrick Maloney in the Democratic primary after the latter man declared his candidacy, so he instead moved to a new Manhattan-Brooklyn 10th District that Rep-Elect Dan Goldman (D-New York City), an heir to the Levi Strauss fortune, eventually won.

In the 17th, Lawler, then a state assemblyman, unseated Rep. Maloney with a 51-49 percent general election victory margin. This, in a new district that the FiveThirtyEight data organization rates as D+7. There is no question that NY-17 will be a top target in 2024.

WA-3: Defeated Favorite to Return — Joe Kent, the Republican who denied then-Rep. Jaime Herrera Beutler advancement into the general election but then lost in November to Rep-Elect Marie Gluesenkamp Perez (D-Skamania County) in one of the nation’s biggest 2022 upsets, says he will return for a 2024 re-match. Because Kent was widely favored to win the seat but failed to convert, we can expect intense competition in what will be an August Washington jungle primary. FiveThirtyEight rates WA-3 as R+11.

Though not covered as extensively as the presidential battle and most Senatorial campaigns, the 435 US House races also figure prominently in next Tuesday’s ballots. While little drama exists concerning these campaigns from an aggregate context, it is still likely that as many as 80+ non-incumbents could win seats for the first time. There are 62 open seats, and easily another 18 to 30 House members could lose their seats.

The current partisan makeup of the House of Representatives is 240 Republicans and 190 Democrats, with five vacancies, three from Democratic seats and two Republican. Today, our House race handicapping chart shows that 229 congressional districts are “safe,” “likely” or “leaning” for the Republican candidate, and 180 districts are “safe”, “likely”, or “leaning” for the Democratic standard bearer, with 26 “tossup” districts that both parties have some chance of winning. In order for the Democrats to re-capture the majority lost two years ago, they would need a net gain of 25 seats from their current level just to reach the bare minimum of 218. With this numerical obstacle standing before them, and in order for the minority party to regain power, they would need a “wave” election, something that has little chance of occurring.

Recent examples of wave elections are the Republican sweep of 2010 and Democratic waves of 2006 and ’08 that drastically changed the composition of the House. Historically, wave elections are driven by the party with a substantial and unparalleled lead going into Election Day. The GOP netted 63 seats in the 2010 midterm election and conversely, Democrats won 31 seats in 2006, followed by another 25 two years later. If campaign historical trends are a true future indicator, as best detected by polling, then 2012 will not be a wave election. As the cycle progressed we have seen a good deal of movement in many races that began as clearly favoring one party or the other. Two contrasting swing races from the west and east are Washington state’s 1st Congressional District and the fast-emerging NY-21.

The Evergreen State has produced a top swing-seat battle in the new 1st Congressional District that was redrawn in a more competitive fashion as part of a deal among the members of the bi-partisan Washington State Redistricting Commission. In exchange for making the previously Democratic 1st District politically marginal and shoring up Republican Jaime Herrera Beutler in the new 3rd District, incumbent Rick Larsen (D) received a safe new 2nd District and the state’s additional seat, the 10th District gained in the national reapportionment formula, was made a Democratic safe haven.

In March of this year, Democratic Rep. Jay Inslee (WA-1) announced his resignation from the House in order to fully focus on his gubernatorial campaign. His vacancy was quickly flooded with interest and, after a hotly contested Democratic primary, former Microsoft executive Suzan DelBene (D) and Snohomish County councilman and ex-state Rep. John Koster (R) won the right to face off against each other in what polling continues to show is a close match-up.

In this key swing seat, a significant amount of money has been spent by outside groups including both the Democratic Congressional Campaign Committee (DCCC) and the National Republican Congressional Committee (NRCC). Recently an independent Survey USA poll (Oct. 19-21; 610 likely WA-1 voters) found DelBene leading Koster by three points, 47-44 percent. The new poll, compared to a previous S-USA study conducted five weeks prior, found that DelBene has increased five points in support, while Koster has lost two points. The results also determined that DelBene has a greater advantage with self-described moderates and independents.

Turning to the St. Lawrence Seaway region along the Canadian border on the north and Lake Champlain to the east is the new NY-21 District and Republican Matt Doheny could be moving into upset position. Lagging behind for most of the race, Doheny has emerged as a serious threat at precisely the right time. Two different polls forecast a closing race. Incumbent Bill Owens released his own data (Global Strategy Group; Oct. 21-23; 403 likely NY-21 voters) staking him to a 47-40 percent lead. But, another independent survey detected a much different result. Siena College (Oct. 29-30; 629 likely NY-21 voters) found the race to be much closer. According to the Siena data, Doheny is up by just one percentage point, 44-43 percent. Clearly, this campaign is very much alive turning into the final weekend.

While a good deal of uncertainty still remains in precisely predicting the composition of the new Congress, it is likely that Republicans will maintain control with their current margin potentially in tact.