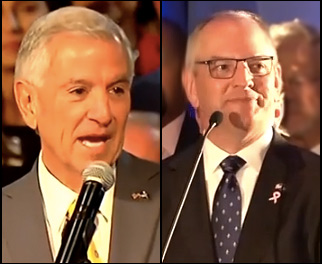 END_OF_DOCUMENT_TOKEN_TO_BE_REPLACED

JMC Analytics, a Louisiana polling staple, conducted two surveys for the upcoming run-off election: one for the US Senate contest and other in the open Baton Rouge congressional district. Both campaigns will be decided on Dec. 6. The third federal run-off election, that in the state’s 5th Congressional District, was not tested.

Like all other pollsters, JMC finds Rep. Bill Cassidy (R-LA-6), the challenger, holding a big lead over incumbent Sen. Mary Landrieu (D). The automated poll of 754 Louisiana registered voters who participated in the Nov. 4 election was conducted on Nov. 20. The ballot test yields Cassidy a 53-38 percent lead, the fifth post-election poll to find the Baton Rouge Congressman holding a double-digit advantage.

But the underlying result is actually a bit worse for Landrieu. Posing a follow-up question to those saying they were undecided, in order to determine the direction they are leaning, the group breaks 55-40 percent in Cassidy’s favor.

The third question queried the respondents’ impression of Landrieu’s leadership on the Keystone Pipeline issue, her sponsored legislation that failed by one vote in the Senate lame duck session, and drew the support of only 13 other members of her party. Twenty-nine percent stated that she used her clout effectively, while 39 percent said she did not. The remainder were undecided or had no opinion.
END_OF_DOCUMENT_TOKEN_TO_BE_REPLACED

Georgia and Louisiana are the only two states that hold post-general election run-offs. In Louisiana, the state primary is concurrent with the general election and features all candidates appearing on the same ballot. Thus, if a contender exceeds 50 percent of the vote, the person is elected outright. In Georgia, all party nominees must obtain an absolute majority to secure election. Therefore, remembering that Georgia has a run-off system for primary nomination, it is conceivable that a candidate would have to endure four separate elections in order to claim a political office.

In 2014, despite many predictions that both the Georgia Senate and governor’s race would be forced into a post-election run-off, neither were. Businessman David Perdue (R) captured the Senate seat with 53 percent, the same percentage in which Gov. Nathan Deal (R) secured re-election. Therefore, the “second generation of Democrats”, meaning Michelle Nunn, the daughter of former US Sen. Sam Nunn (D), and Jason Carter, the grandson of former President Jimmy Carter, both failed to fulfill pre-election expectations.

And, with seven of the state’s 14 congressional district incumbents running END_OF_DOCUMENT_TOKEN_TO_BE_REPLACED

A federal three-judge panel, on a 2-1 vote, yesterday declared the 3rd Congressional District of Virginia (Rep. Bobby Scott-D) unconstitutional because of racial gerrymander. This means a partial re-draw will commence at some point after the 2014 election and before the 2016 nomination cycle begins.

The 3rd District begins in downtown Richmond, travels to Petersburg, comes back toward the James River, and then juts south to annex most of the cities of North Newport News, Hampton, Portsmouth, and downtown Norfolk. The plaintiffs’ argument was basically that the Republican-dominated legislature drew this seat to pack as many African American Democratic voters as possible into this one district.

Because the specific communities were added to make the seat 56.9 percent black, the plaintiffs claimed the territory was “packed” for political reasons. They said the final racial composition figures diluted the regional African-American vote by drawing one such strong black district. Many have argued that this area could sustain two districts where African-American influence is heightened. The Republican defendants argued they were not retrogressing the district as dictated by the Voting Rights Act.
END_OF_DOCUMENT_TOKEN_TO_BE_REPLACED