Yesterday, we covered the races being decided in today’s run-off (Texas) and primary elections (Georgia) and mentioned that former Texas solicitor general Ted Cruz has a legitimate chance of upsetting Lt. Gov. David Dewhurst in the Lone Star State’s US Senate Republican run-off. The release of the new Public Policy Polling data for Texas underscores that the trends are supporting an upset result. According to their survey (July 28-29; 665 Texas GOP likely run-off voters) Cruz has a 52-42 percent lead over the lieutenant governor. The Dewhurst campaign countered with their internal Baselice & Associates poll showing their candidate with a 48-44 percent lead, but these results appear out of line with the other publicly presented trends.

Perhaps most disconcerting for the Dewhurst camp, the PPP numbers report Cruz to be leading 63-33 percent among those who are most excited about voting in the run-off election. Additionally, the ex-solicitor general leads the veteran statewide office holder among those considering themselves as Tea Party voters by a huge 75-22 percent split. In a low turnout election where 70 percent identify themselves to be somewhat or very conservative, this type of spread could well be the defining factor.

Typically, Texas primary and run-off elections record very low turnouts. More than 1.4 million people voted in the May 29 primary election, but a considerable smaller number will vote in the secondary election. The likely turnout projection suggests a participation rate of less than one million voters. 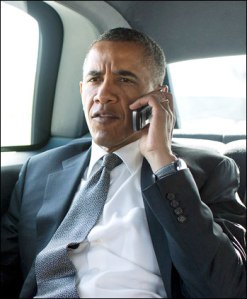 A series of new presidential election polls reveals a further tightening of the campaign on the national level, though President Obama maintains a lead over Mitt Romney in the most competitive states.

The only national poll not showing a dead heat, taken over virtually the same time frame as PPP’s survey with an identical sample size (July 18-22; 1,000 registered voters) from Republican pollster Bill McInturff and his Democratic counterpart Peter Hart, actually stakes the president to a 49-43 percent advantage. Based upon the available data, though the polling methodology appears sound, the McInturff/Hart result appears to be an outlier.

National Public Radio released their poll of the 12 commonly viewed battleground states (conducted by the Resurgent Republic and Democracy Corps organizations, July 7-12; 1,000 voters nationwide with an oversample of 462 from the battleground states) but its aggregate result is of little consequence. Though this poll, too, shows an Obama-Romney tie at 46 percent, such a figure is virtually useless because the combined popular vote in the most hotly contested states doesn’t translate into specific electoral votes.

What is valuable are battleground voters’ perceptions and attitudes about the candidates. As we have seen for months, there is severe polarization between the two major parties. By almost a 9:1 majority, Democrats believe the president has performed well in office. Conversely, the same virtual ratio of Republicans believes he has not. Independents tend to fall more on the Republican side, slightly rating Obama’s job performance more negative than positive. Also, Independents in these states generally oppose the Obama healthcare law and, by a slight margin, believe that the Supreme Court decision upholding the law is incorrect. This could prove significant as the campaign continues to evolve.

One thing that does deviate somewhat from at least the conventional wisdom, the NPR battleground state poll does show that both candidates have a strong base. Especially for Romney, this is a change. Before, most data indicated weakness among Republicans for their presumptive nominee, but the NPR data gives both contenders right around 90 percent support within their own party voter cell sample. This finding is good news for both men.

New individual key state surveys stack up relatively well for the president in the fact that he leads in most, but in no case is his advantage more than mid-level single-digit numbers.

Rasmussen Reports gives the President a six-point, 48-42 percent advantage in Michigan. Survey USA finds a similar five-point, 48-43 percent margin for Obama in all-important Florida; and We Ask America returns similar 49-42 percent and 49-43 percent spreads (in Obama’s favor) in Wisconsin and Nevada, respectively. Magellan Strategies produced a much closer 50-46 percent Nevada model. Quinnipiac University shows a tie in Virginia, and the Civitas Institute projects Romney to a one point, 49-48 percent razor-thin edge in North Carolina. Though it’s not a battleground state, Survey USA detects only a 46-40 percent advantage for the president in liberal Minnesota, which is a surprise.

The cumulative effect of the most recent survey data makes the president and his advisers uncomfortable. These are not the type of results strong incumbents would be seeing at this point in the election cycle. It’s going to be quite a remainder of the year.

Earlier in the week we presented surveys from Texas and Wisconsin that showed underdog Republican Senatorial candidates Ted Cruz (Texas, vs. Lt. Gov. David Dewhurst) and Eric Hovde (Wisconsin, vs. Tommy Thompson, Mark Neumann and Jeff Fitzgerald) surging to the lead in their respective campaigns. Yesterday, their main opponents, both considered heavy favorites when their efforts began, cited polls that produced a different result.

In Texas, Dewhurst, stung by the Cruz campaign’s Wilson Perkins Allen poll showing him trailing 40-49 percent, countered with his own Baselice & Associates data (July 5-8; 601 likely Texas GOP run-off voters) that posts him to a 50-42 percent lead. In comparison, the Cruz poll is likely the better of the two. Wilson Perkins Allen drew their sample from only those people who actually voted in the May 29 primary. Dewhurst’s survey is pulled from a larger universe and then screened for likely run-off participants. Though non-primary voters have the right to vote in a run-off election, it seldom happens. The overwhelming majority of people casting ballots in the July 31 election will be those who previously voted.

In Wisconsin, Marquette University Law School released a new survey (July 5-8; 1,000 Wisconsin adults, 949 registered voters), that puts former governor Thompson back into the lead. Yesterday, we covered a new Public Policy Polling study that showed businessman Eric Hovde holding a two-point advantage. According to Marquette, Thompson has a 35-23 percent lead over Hovde among the 427 people who identified themselves as planning to vote in the Aug. 14 Republican primary.

Like the PPP survey of yesterday, Marquette, too, shows Democratic Rep. Tammy Baldwin (D-WI-2) in very tight races with all four Republican candidates. Against Thompson, among likely voters (799), she trails 41-45 percent. When paired with Hovde, she leads 44-38 percent.

The Republican primary will be decided as a matter of turnout, but it is more plausible to believe that Thompson has the advantage. Both PPP and Marquette are in the same range for the general election, thus confirming all previous polls projecting that the two parties are in a close contest. 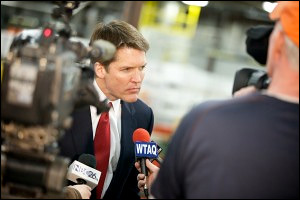 According to PPP, Hovde has actually overtaken former governor Tommy Thompson in the Republican primary. Ex-representative Mark Neumann (R-WI-1) and Assembly Speaker Jeff Fitzgerald have dropped back into a clear second tier. The numbers give Hovde a 31-29-15-9 percent lead over Thompson, Neumann, and Fitzgerald, respectively. If Hovde and Thompson were in a two-way race, the newcomer would lead the former Wisconsin chief executive 46-39 percent.

Though the spread is virtually even between Hovde and Thompson, the momentum is not. When compared to PPP’s April 13-15 poll, one that did not test Hovde, Thompson has fallen 10 points. Neumann has dropped seven points in support, and Fitzgerald 13. Two other research studies released last week, one from Democratic candidate Tammy Baldwin and the other from Hovde’s campaign, also showed a change in the Republican field. Baldwin’s data showed Hovde leading Thompson. The businessman’s own poll had him close to, but still behind, the former four-term Governor.

Mr. Hovde has been dominating the airwaves with a series of ads focusing on government spending and the debt crisis, while others offered a vigorous defense of Gov. Scott Walker. As you will remember, the governor successfully repelled a recall effort that gained national attention.

In his best series of spots, Hovde’s daughters talk about their father in the family kitchen with the candidate in the background reading the newspaper at the counter. They banter back and forth about how Hovde won’t be liked in the Senate because he won’t vote for increased debt and more government spending, at which point Hovde chimes in about not caring if he’s liked but certainly approves of their message.

The Wisconsin Senate race, open because four-term incumbent Herb Kohl (D) is retiring, is one of the most important in the nation and its result will go a long way toward determining which party will control the chamber in January.

The current Public Policy Polling survey, as found in other polls, continues to detect weakness for Tammy Baldwin. The consensus Democratic candidate, a seven-term congresswoman from Madison, again fails to take command on the general election ballot test. A Democrat leading in the early going of a Wisconsin general election is expected. The fact that Baldwin is virtually tied with all four GOP candidates is a troublesome sign for her. In the latest PPP poll, Hovde leads the Madison Representative 45-44 percent. Thompson and Baldwin are tied at 44 percent. The congresswoman leads both Neumann and Fitzgerald by only four points apiece.

Clearly the conglomeration of polls is making several things clear. First, whether he has overtaken Thompson or not, Hovde clearly has positive momentum in the Republican race. Second, Rep. Baldwin is under-performing for a Democrat at this point in a Wisconsin statewide race, and third, the GOP has a strong chance of winning this open seat, which would constitute a major step in wresting the Senate majority away from the Democrats.

The Wisconsin primary is Aug. 14, and its result will be significant in shaping the national political landscape.

On the eve of the Supreme Court’s Obamacare decision announcement, Public Policy Polling (June 21-24; 1,000 registered voters) conducted a national survey of attitudes and impressions regarding the political leadership associated with the healthcare issue. The results are interesting, and potentially disheartening for President Obama and his party.

In answering the question about which candidate the respondents trusted more pertaining to healthcare issues of the greatest importance to they and their individual families, by a surprisingly close 45-44 percent count, the polling sample favored presumptive GOP nominee Mitt Romney. Perhaps even more stunning, by a margin of only 47-43 percent, the cell group said they trusted the president on healthcare more than the congressional Republicans. For the better part of time since the 2006 election campaign, congressional Republicans in particular, have been scoring poorly on favorability index questions. So, it is unusual to see them virtually at parity with the President on his signature issue.

But, perhaps the most surprising response of all came to the question as to which candidate had the most clear stance on healthcare. Despite the passage of his healthcare plan being the president’s most significant domestic agenda accomplishment and Romney being less defined, Obama only tops the Republican by a slight 45-42 percent margin when claiming that one candidate or the other has the more clear stances on the healthcare issue.

As one more indicator that the healthcare issue will be one that helps determine the outcome of this presidential election, the PPP survey sample would vote for the president over Romney by a 48-45% margin, quite in line with their specific healthcare answers.