AK-AL: Now Top Three — Officials from the Alaska Division of Elections, grappling with the new top-four qualifying system, have changed their initial ruling after finalist Al Gross (I/D), announced earlier this week that he was ending his campaign. Division officials initially were leaning toward placing the fifth-place finisher, Republican Tara Sweeney, into the group of four finalists, but they have since reversed themselves.

The final ruling does not add a replacement for Dr. Gross, meaning that only former Gov. Sarah Palin, businessman Nick Begich III (R), and former state Rep. Mary Peltola (D) will advance into the special general election scheduled for Aug. 16. Sweeney followed up with an announcement that she will not challenge the Elections Division’s ruling.

IL-15: Conflicting Polls — The next in a series of paired incumbent elections is scheduled in Illinois when two sets of paired incumbents will square off in the June 28 primary election. In the downstate Republican primary, Reps. Rodney Davis (R-Taylorville) and Mary Miller (R-Oakland) are battling for the new gerrymandered 15th District, one of only three Land of Lincoln seats that will likely send a Republican to the House. This week, we see two polls released with conflicting conclusions.

The Victory Geek firm, polling for the Illinoize political blog (June 15-19; 515 IL-15 respondents; interactive voice response system), finds Rep. Davis leading Rep. Miller, 38-35 percent. When forcing the undecideds to make a choice, the full universe breaks for Davis, 51-49 percent. The bad news for him is when voters are informed that former President Trump has endorsed Miller, the preference factor switches to 47-39 percent in Miller’s favor.

MN-1 Special: Virtual Tie — An Expedition Strategies survey of the MN-1 special election (June 6-9; 400 likely MN-1 special election voters; live interview) scheduled for Aug. 9 finds the two party nominees, former Republican state Rep. Brad Finstad and ex-Hormel corporation CEO Jeff Ettinger (D) falling into a virtual tie. The ballot test gives Finstad a 48-47 percent edge in a district that is no stranger to close elections. The winning percentage in the past three congressional elections was 48.6 percent, 50.1 percent, and 50.3 percent in 2020, 2018, and 2016. The seat is in special election because incumbent Rep. Jim Hagedorn (R) passed away in February.

In terms of what the survey respondents perceive as the most important issue, the “economy and cost of living” registered 27 percent, “guns” was second with a 12 percent mention, and “election integrity” was third with 10 percent. Interestingly, the healthcare issue, which now includes COVID, registered as the most important issue from only six percent of the respondents. Ettinger scored a 53-40 percent advantage on preferring a candidate with experience running a business as compared to Finstad’s career in government and rural policy making.

A Molinaro victory would mean another special election GOP conversion of a Democratic seat as we saw in Texas on June 14 when Republican Mayra Flores defeated Democrat Dan Sanchez and two minor candidates to win the seat from which Rep. Filemon Vela (D-Brownsville) resigned. If the GOP is successful in NY-19, and holds their other 2022 special elections in AK-AL, MN-1, NE-1, and NY-23, the conference will increase to 215 members, just three away from majority status.

TX-28: Rep. Cuellar Officially Wins — The tight Democratic primary and runoff campaign featuring veteran Rep. Henry Cuellar (D-Laredo) and attorney and 2020 congressional candidate Jessica Cisneros has finally come to an official end. The Texas Secretary of State has reported the final results of the runoff recount. Counting the ballots again actually increased Cuellar’s lead by eight votes. The final counts shows a 22,901 to 22,612 margin in favor of Rep. Cuellar, a spread of 289 votes, or 50.3 percent of the runoff electorate.

Rep. Cuellar now advances into a general election against former Sen. Ted Cruz (R-TX) staff member Cassy Garcia. This could become a competitive general election in a district that the FiveThirtyEight data organization rates as D+7. Though Garcia will have the ability to run a credible campaign, Rep. Cuellar is now viewed as the favorite to win a 10th term. 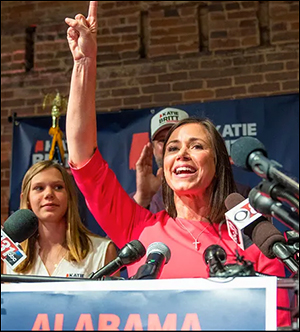