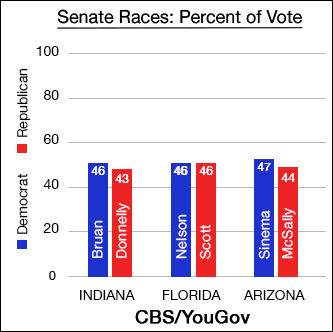 END_OF_DOCUMENT_TOKEN_TO_BE_REPLACED

July 20, 2016 — A final last-gasp effort at denying Donald Trump the Republican nomination was easily slapped down the other day. The Never Trump forces were dealt a crushing loss last week in the Convention Rules Committee (only hitting the 20 percent mark in one vote), but returned to make a move against adopting the rules on the convention floor. This motion, too, was easily defeated on a voice vote.

The Never Trump group was never large enough to become a major threat, and went the way of all such challenges when supported by only a small minority. Therefore, the delegates will nominate Donald Trump and Mike Pence on Wednesday night, with the presidential acceptance speech on Thursday night in accordance with normal national convention procedure.

Once again, we continue to see data producing very tight margins in the swing states and the CBS/YouGov data is no exception. Michigan is normally not a politically marginal state in presidential elections, going for the Democratic nominee in the last six national campaigns, but voters have elected Republican governors, a majority of the congressional delegation, and given the GOP substantial advantages in both houses of the state legislature in several elections during this same time period.

The new CBS/YouGov data finds Trump leading Hillary Clinton 40-39 percent in Iowa, but trailing 39-42 percent, and 40-44 percent in Michigan and Ohio, respectively. All of these numbers suggest virtual ties between the two candidates because the results fall within the polling margin of error.

END_OF_DOCUMENT_TOKEN_TO_BE_REPLACED

March 15, 2016 — It’s very likely that today’s results from the all-important Ohio and Florida Winner-Take-All Republican contests will determine whether Donald Trump wins the GOP presidential nomination, or whether the campaign descends into a contested convention.

While Trump appears to be well ahead in Florida, and is the odds-on favorite to capture that state’s 99 delegates, the Ohio race is very much in doubt.

Though Trump is approaching a mid 40s support range in the last three Sunshine State polls, and appears 20-plus points ahead of Sen. Marco Rubio (R-FL), it is important to remember that only registered Republicans can vote in tomorrow’s closed primary. Therefore, Trump’s polling numbers may be a bit inflated if the pollsters were not properly screening solely for registered Republican voters.

END_OF_DOCUMENT_TOKEN_TO_BE_REPLACED

Feb. 16, 2016 — The sudden death of Supreme Court Associate Justice Antonin Scalia over the weekend will have a major effect upon the 2016 presidential elections. Both sides will now emphasize base issues such as abortion and 2nd Amendment rights in order to energize their respective constituencies. The heightened political atmosphere could lead to the largest electoral turnout in United States history.

Expect the Supreme Court vacancy to dominate the political coverage for the rest of the year. The high court situation not only changes the open presidential campaign, but it puts new importance upon the US Senate campaigns because the Scalia replacement confirmation battle could possibly be delayed to 2017. Since neither party will have close to the 60 seats needed to invoke cloture, we can expect this contentious situation to be unresolved for months.

END_OF_DOCUMENT_TOKEN_TO_BE_REPLACED

Jan. 27, 2016 — Now less than a week before the Iowa Caucuses, five new polls of the Democratic presidential contest, all conducted within the same time period, arrive at very different conclusions. Three of the surveys find Sen. Bernie Sanders (I-D/VT) leading former Secretary of State Hillary Clinton, while two arrive at the opposite result.

The Emerson College Polling Society, which is a group of students from Emerson College in Massachusetts who have established such a record of accuracy that the American Association of Public Opinion Research has granted them membership, employs the smallest sample size at 258 self-identified Democratic voters, while CBS/YouGov’s 490-person polling universe was the largest.