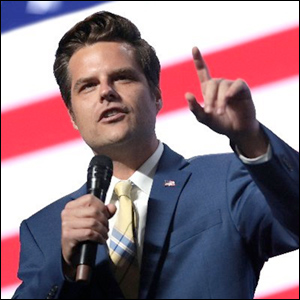 Lombardo has ingested $1 million of his own money into the race and just released a new television ad emphasizing the sex trafficking investigation that involves the congressman. Now with only test pilot Greg Merk on the ballot to deflect anti-Gaetz votes, Lombardo has positioned himself as a challenger with the potential ability to snatch the nomination away from the congressman. The Florida primary is Aug. 23, and this race will become very interesting between now and then.

Arizona: Conflicting Polls — Data Orbital and Moore Information are out with polls that tell a different story in what has become a GOP gubernatorial race between former news anchor Kari Lake and Arizona University Regent Karrin Taylor Robson. Last week, ex-US representative and 2000 gubernatorial nominee Matt Salmon dropped out of the race and endorsed Robson.

The Moore Information survey was conducted for the Salmon campaign (June 22-23; 1,000 likely Arizona Republican primary voters; interactive voice response system) and produced a ballot test that posted Robson, for the first time, to a 38-37 percent edge over Lake in a two-way race.

According to the GHY results, state Comptroller Peter Franchot slips by author Moore by just a 21-20 percent margin, with former Democratic National Committee chairman Tom Perez closely trailing with 16 percent. A third of the voters still claim to be undecided within two weeks of the primary election. The nomination vote was delayed from its original June 28th date when a court overturned the state’s new congressional lines.

Wisconsin: One Less Republican — Businessman Kevin Nicholson was a late entry into the Republican gubernatorial campaign and now he is an early exit. Nicholson, a former US Senate candidate, Wednesday said he is discontinuing his gubernatorial campaign conceding that he has little chance to win the party nomination. This leaves the race as an ostensibly two-way affair between former Lt. Gov. Rebecca Kleefisch and construction company owner Tim Michels. Gov. Tony Evers is unopposed for the Democratic nomination. The general election is expected to be rated as a toss-up.