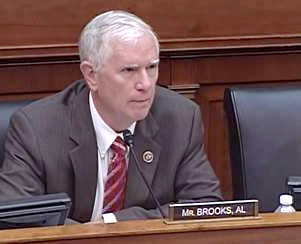 Alabama: Brooks With Momentum — US Rep. Mo Brooks (R-Huntsville) continues to make strong strides to capture one of the two runoff positions in Tuesday’s primary election. All polling suggests that none of the three top candidates will reach the 50 percent plateau to claim the nomination outright. The latest survey, from the Cygnal research group for the Alabama Daily News and Gray Television (May 15-16; 634 likely Alabama Republican primary voters), sees Rep. Brooks moving past retired “Black Hawk Down” pilot Mike Durant, while knocking on race leader Katie Britt’s door.

The ballot test breaks 31-29-24 percent (Britt, Brooks, Durant) meaning that all three candidates still have the potential of qualifying for the two-person runoff. Tuesday’s vote will undoubtedly be close. The eventual Republican nominee is a lock to succeed retiring Sen. Richard Shelby (R) in November. The runoff election is scheduled for June 21.

AK-AL: Cross-Endorsing — Previously, the Alaska Republican Party endorsed businessman Nick Begich III in the special election to replace the late US Rep. Don Young (R-Ft. Yukon) over former governor and 2008 vice presidential nominee Sarah Palin (R). Now, we see another unusual endorsement. Begich is the grandson of the late US Rep. Nick Begich (D), who died in a plane crash in 1972. This led to Young winning the special election in 1973. While Nick Begich III is following in his family’s footsteps in running for public office, he is doing so as a Republican. This move now leads his uncle, former US Sen. Mark Begich (D), to endorse Anchorage Assemblyman Chris Constant (D) in the large field of 48 candidates instead of his nephew.

Under the new Alaska electoral system, four of the 48 candidates on the June 11 jungle primary ballot, regardless of party affiliation, will advance to the Aug. 16 special general election.

NY-17: Internal Dem Chaos — Assuming the presiding judge adopts the special master’s redistricting map, it appears that Democratic Congressional Campaign Committee chairman Sean Patrick Maloney (D-NY) has created a political hornet’s nest with his declaration that he would challenge freshman Rep. Mondaire Jones (D-Westchester County), who happens to be African American, in the new 17th District rather than compete for the seat directly to the north, the new 18th District. Rep. Maloney said he is running in the 17th because that is where the map placed his home, but a substantial part of his current constituency also lies in the new 18th.

Rep. Alexandria Ocasio-Cortez (D-Bronx) criticized Maloney saying, “I don’t think he should be DCCC chair if he’s going to challenge another member. It’s completely inappropriate.” Neighboring Rep. Jamaal Bowman (D-Yonkers) was more critical. He said Rep. Maloney is trying “to dismantle and tear down Black power in Congress” and should run in his own district (meaning District 18).

Missouri: Map Adopted — Gov. Mike Parson (R) signed the legislation enacting the new Missouri congressional districts. With that, now New Hampshire remains the only state that has not completed the re-mapping process. The Missouri map is largely an extension of the current eight-district plan and will likely continue to send six Republicans and two Democrats to Washington. Rep. Ann Wagner’s (R-Ballwin) 2nd District becomes more Republican, thus stabilizing her seat. Interestingly, the legislature did not change the candidate filing deadline of March 29, so no new individuals can enter the congressional races even though the district lines are somewhat different.