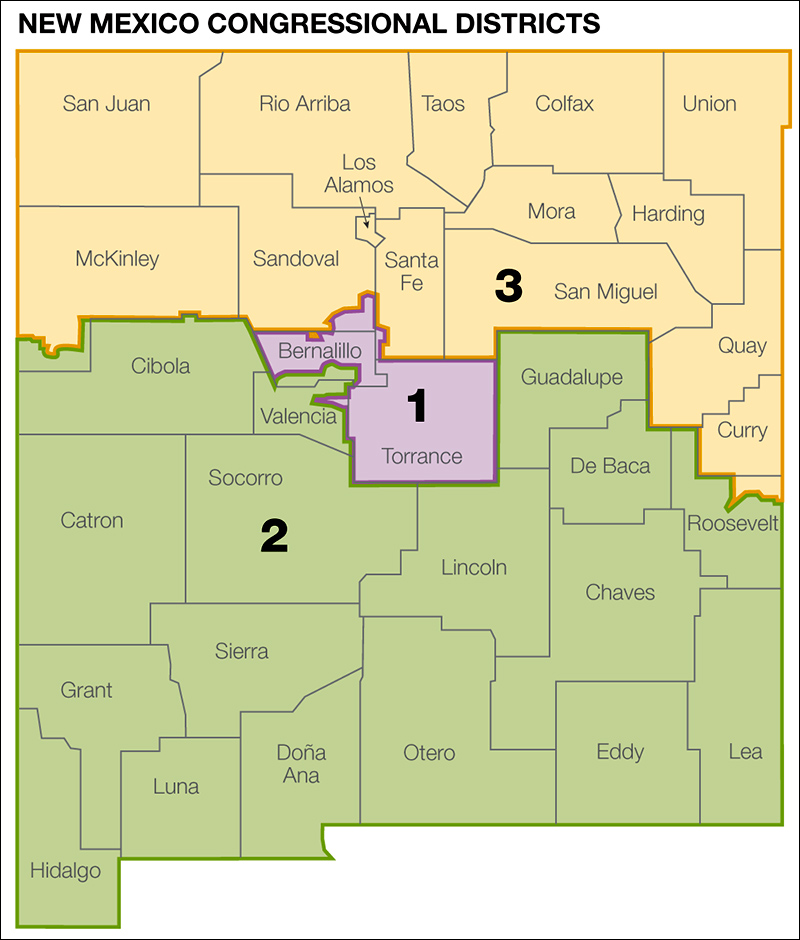 Sept. 15, 2021 — During the last week reports were surfacing that suggested the New Mexico State Democratic leadership was considering ways to turn the current 2D-1R congressional map into a 3D-0R plan. This might be easier said than done, however.

New Mexico is one of the Democrats’ 15 “trifecta states,” meaning the party controls all three legs of the redistricting stool: the state Senate, state House, and governor’s mansion. Republicans have 23 trifectas. Therefore, if the Democrats are to minimize the redistricting damage, or even possibly come out slightly ahead, they must fully use their political leverage in the states they control.

Of the Democrats’ 15 trifectas, however, five of the states handle redistricting through a commission, and in another five the party already controls all the congressional seats. Therefore, if they are to make a national redistricting play they must take maximum advantage in Illinois, Nevada, New Mexico, New York, and Oregon. The lay of the land, however, makes it very difficult to expand their fortunes in Nevada and possibly Oregon, which is why trying to take an extra seat from New Mexico makes some sense from a national Democratic perspective.

New Mexico has three congressional seats, all of which a freshman represents. The 1st (Rep. Melanie Stansbury; D-Albuquerque) and 3rd Districts (Rep. Teresa Leger Fernandez; D-Santa Fe) in the northern part of the state are safely Democratic.

The southern 2nd District (Rep. Yvette Herrell; R-Alamogordo), which encompasses almost all of the territory south of Albuquerque, has performed as a Republican seat at the congressional level in 19 of the last 21 elections. Democrats picked up the district in their recent wave election years (2006; 2018) with open seat victories, but the voters favored the Republican challenger in both successive elections. This, despite NM-2 being a majority Hispanic district: 53.7 percent of the overall population according to the previous census data.

Additionally, the current seats are not widely out of population balance. The 1st District needs to gain just 11,264 people, while the 2nd must shed 8,181 individuals, and the 3rd must relinquish 3,082 residents. Therefore, a radical re-draw that results in a sweep of the three districts for one party when the population swings are so small would certainly draw a political gerrymandering lawsuit upon adoption of the new map. Whether such a lawsuit would succeed of course is a question that can only be answered when the final map is drawn and enacted.

Likely, the only way to draw a 3D-0R map in New Mexico would be to keep the northern 3rd District Democratic seat virtually intact, and then draw the Republican 2nd into Albuquerque. This would cause the city and Bernalillo County to be split resulting in the 1st and 2nd then appearing as southwestern and southeastern seats that divide Albuquerque, and subsequently stretch all the way to the Mexican border.

Even this draw might make it difficult to create three Democratic seats because the southeastern district would still have the potential of being Republican enough to make the party’s candidate, in this case Rep. Herrell, strong enough to have a chance of winning a general election.

New Mexico is a good example as how a largely internal state exercise can transform itself to help achieve a national partisan goal. It remains to be seen just how bold the New Mexico Democrats will be, as this small and sometimes obscure state steps into the national redistricting limelight.