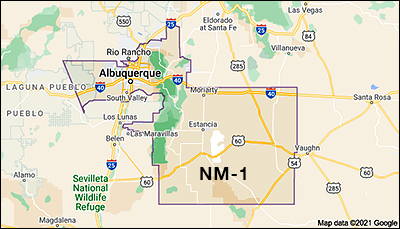 Additionally, NM-1 is a below average congressional district in terms of individual wealth, ranking 320th of the 435 seats in per capita income according to the latest available statistics (2019). The seat ranks just over $8,000 below the national income average for congressional districts.

Therefore, it is reasonable to surmise that the district has been a strong recipient of the federal government’s COVID-related reimbursement programs. This would likely lead to a more favorable impression of government services from the Democratic base that was motivated to participate in this special election.

Overall, the special election turnout was 28.2% of the 1st District’s 465,956 voter registration universe. In the 2020 general election, the congressional participation rate was 69 percent. Therefore, with a 40-plus percent drop-off in turnout from the last general election to the current special, it is difficult to derive any pattern that could be detected as a precursor to what may unfold in the 2022 general election.

If one is looking for a more significant pattern from the four special congressional elections that have so far been conducted, it is arguable that the TX-6 jungle primary vote on May 1 could be the more salient example. In a north Texas district that is undeniably moving into the competitive realm from what was once a safe Republican seat, the leading Democratic candidate in a field of 23 competitors even while some analysts in both parties were conceding that she could finish first, Jana Lynne Sanchez failed to even qualify for the runoff.

Keeping in mind that media analysts were predicting Democratic US House gains of between five and 20 seats even on election night itself only to see the party lose a net 13 seats, tells us how difficult it is to read election patterns and forecast a future, or even a present, result.

What we do know from the NM-1 special result is that the Democrats, with a larger voting base, were more successful in motivating their party loyalists to participate. Beyond that, speculation pertaining to more significant conclusions should largely be disregarded.