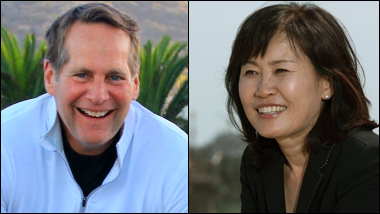 • CO-3: Western Colorado restaurant owner Lauren Boebert scored a major Republican primary upset against Rep. Scott Tipton (R-Cortez), denying him renomination. In the general election, from a district that should at least lean to the Republicans, we see Democratic candidate Diane Mitsch Bush claiming a clear financial advantage, while an August and a September survey both give the Democrat a slight lead.
The Mitsch Bush campaign is also attacking Boebert in ads for her failure to appear in court after being charged with violating the governor’s shut down order during the early stages of the COVID pandemic.

• IL-13: Land of Lincoln Rep. Rodney Davis (R-Taylorville) had a close call against Democrat Betsy Dirksen Londrigan (50.4 – 49.6 percent) in 2018, and she returns for a re-match. GBAO, a Democratic research firm, found the congressman holding a one-point lead in their Sept. 17-20 survey, suggesting the 2020 outcome could be just as close as we saw two years ago. Both candidates are well-funded, and this is clearly the most competitive congressional race in Illinois.

• IN-5: Democrats have been saying for months that they have a chance to take this central Indiana largely suburban district that has been in Republican hands since former Rep. Dan Burton first won the seat in 1982. Now, former state representative and 2016 lieutenant governor nominee Christina Hale (D) is in position to potentially score an upset. She is facing state Sen. Victoria Spartz (R), a Ukrainian native who has yet to rebound from dropping behind in polling. The latest survey, that showed Hale claiming a seven-point, 47-40 percent lead (Global Strategy Group), was taken all the way back in mid-August.

• MT-AL: Montana should be a strong state for President Trump, but with the national race and a competitive US Senate and open gubernatorial battle underway, expecting a majority of voters to support a straight Republican ticket that would carry through to the state’s lone congressional district may be a bridge too far. This is the sixth consecutive election in which State Auditor Matt Rosendale has run for a different office, including state House, state Senate, US House, State Auditor, US Senate, and now again the at-large US House seat.
The Democratic nominee is former state Rep. Kathleen Williams who held Rep. Greg Gianforte (R-Bozeman), now running for governor, to a 51-46 percent victory. The latest poll, from Siena College/New York Times (Sept. 14-16; 625 likely Montana voters) gives Williams a three-point, 44-41 percent, edge.

• NJ-2: Garden State Rep. Jeff Van Drew (R-Dennis Township/Atlantic City) was elected as a Democrat in the 2018 open seat campaign after veteran Rep. Frank LoBiondo (R) retired but switched to the GOP a year later. Now he faces the general electorate for the first time as a Republican. His opponent is Amy Kennedy, wife of former US Rep. Patrick Kennedy (D-RI), the son of the late Sen. Ted Kennedy. Though the district has a strong Republican voting history, two surveys, covering the period between Sept. 14-17, gave Kennedy leads of four and five points.

• OH-1: Rep. Steve Chabot (R) was first elected to his Cincinnati congressional seat in 1994 but lost it in 2008. He returned to score a re-match victory in 2010, and now again finds himself embroiled in a tough race. A campaign finance controversy has also brought him negative press attention. An early September poll, from Normington Petts & Associates, gave challenger Kate Schroder a 50-46 percent lead over the veteran incumbent.