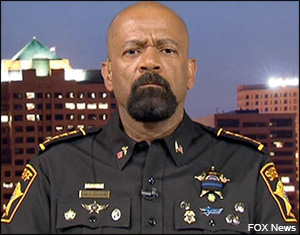 Magellan Strategies just completed a poll for the “Committee to Defend The President.” The survey questions seems to indicate that Milwaukee County Sheriff David Clarke is the true test subject, and quantifies him as a potential Senate Republican candidate. Though becoming a well-known conservative spokesman, particularly concerning issues surrounding the 2nd Amendment, Sheriff Clarke was elected as a Democrat.

The survey was conducted over the Feb. 9-16 period and, in rather unusual fashion, fielded one general election poll (500 respondents) and two 300-sample Republican primary queries. The latter data is now moot since the testing purpose was to measure Sheriff Clarke’s political strength against that of Rep. Sean Duffy (R-Wausau). Since the poll was completed, Duffy announced that he will not run for the Senate meaning that the Republican respondents professing to favor Clarke over Duffy at a 32-26 percent preference rate now has no relevance.

In a ballot test involving only Clarke and Sen. Baldwin, the incumbent Democrat scores a 49-35 percent advantage. Obviously, the senator is in decent political shape, but we also must remember how badly pollsters fared in Wisconsin during the 2016 election. No poll found Trump leading in the state (he won, 47-46 percent), and only two surveys during the entire election cycle posted Sen. Ron Johnson (R) as leading former Sen. Russ Feingold (D). On Election Night, Johnson prevailed 50-47 percent. The 14-point Baldwin spread is commensurate to numbers that Feingold saw for the better part of last year.

The Baldwin individual numbers are interesting. She scores a relatively strong 49:34 percent positive to negative job approval, but her personal rating drops to 45:39 percent. This is unusual since most incumbents score better personally than on job approval when a significant discrepancy exists between the two indexes.

Whether Sheriff Clarke becomes a Republican Senate candidate remains to be seen. Regardless of which potential GOP contender actually advances to the general election, we can count on seeing a strong campaign develop, and one that forces Baldwin to spend heavily and run a strong Get-Out-The-Vote program … both of which she has proven capable of implementing.

The Magellan poll is the first of many, many surveys we will see through the next several months as the Wisconsin race, and others, begin to crystallize.