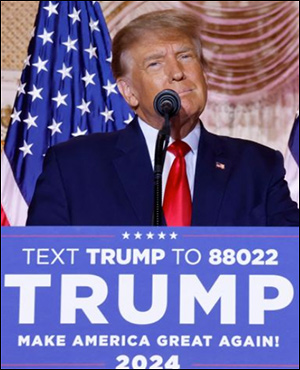 Former President Donald Trump announced that he will run for president in 2024.

Donald Trump: Officially Announces — Former President Donald Trump officially announced Tuesday night from his Palm Beach, Florida home in Mar-a-Lago that he will again run for president in 2024. He becomes the first official candidate in the next presidential race.

With controversy surrounding him and being tagged as the prime Republican loser in the 2022 elections because candidates he endorsed, supported, and in some cases recruited, went on to to lose their general election bids, Trump begins his new quest in a more weakened political position than he would have otherwise. It is now clear that he will not move unencumbered through the Republican nomination process as several candidates will eventually step up to challenge him in a fight as to who will become the party standard bearer.

Polling: Already Conflicts — Expect to see a plethora of polling released into the public domain for the 2024 presidential contest, and much of it will conflict with other data. Already, such a pattern has begun. Since the election, we’ve seen three Republican presidential primary polls being released.

None of these polls should be taken particularly seriously. All are national polls, two of which have small samples and are not reflective of Republican primary voters casting ballots in state primaries.

Majority Status: Republicans Clinch — Late yesterday afternoon Pacific time, California US Rep. Mike Garcia (R-Santa Clarita) was projected the winner of his 27th District congressional race, which was enough to officially clinch the US House majority for the Republicans. The Garcia victory became the 218th GOP seat and with this result, four consecutive years of Democratic control comes to an end.

Rep. Garcia had led consistently throughout the 2022 race, and the size of his lead was somewhat surprising. Running for his second full term after winning a special election in early 2020 and being re-elected by a razor-thin margin in the regular election later that same year, Rep. Garcia was viewed as a highly vulnerable incumbent in heavily Democratic California.

In this current election, however, Garcia was projected the winner when holding a 54.2 percent preference factor with 78 percent of the vote tabulated. Obviously, his margin of 13,846 votes was enough to sustain even a late influx of Democratic votes.

Colorado: Projections Coming Soon — Tomorrow, we will reach the ballot acceptance deadline in Colorado. This means that, with all ballots finally in the system, we will soon see projections being made in the state’s two uncalled races, the 3rd District contest involving Rep. Lauren Boebert (R-Silt), and the new 8th District where state Rep. Yadira Caraveo (D-Eastlake) holds a slight 1,691-vote advantage over state Sen. Barbara Kirkmeyer (R-Weld County).

In the seven outstanding districts, both parties lead in three races, with the CA-13 contest headed to a potential seesaw ending where both candidates, state Assemblyman Adam Gray (D-Merced) and agribusinessman John Duarte (R), both have legitimate chances to win.