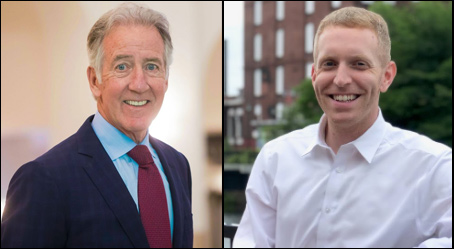 END_OF_DOCUMENT_TOKEN_TO_BE_REPLACED

The Massachusetts redistricting situation just became clearer yesterday as 75-year-old, 11-term Rep. John Olver (D-MA-1) announced that he will not seek re-election next year. Because the state grew at only a 3.1 percent rate during the past 10 years, far below the national rate of growth rate of 9.7 percent, Massachusetts loses a seat in reapportionment. With 10 Democrats in the delegation, it was clear that an intra-party pairing would have to occur in a new nine-district map unless one member vacated his seat.

Rep. Olver’s western-most 1st district had been talked about as the top prospect for collapsing. His retirement had been rumored for months, though the congressman publicly stated on numerous occasions that he would run again.

MA-1 needs to gain the most number of people in the state, (82,558 individuals), though all 10 districts are under-populated. Now, without an incumbent, it is clear that this is the territory that will be melded into another district.

The Olver decision solves a major problem for the rest of the delegation. Originally, when Rep. Mike Capuano (D-MA-8) was looking to challenge Sen. Scott Brown (R), it was assumed that his Boston-Cambridge seat would be eliminated. There were also discussions about pairing freshman Rep. Bill Keating (D-MA-10) with one of the Boston-area members. But now, all will survive because the lost seat will be Mr. Olver’s. The congressman becomes the 22nd member to make public his intention to leave the House at the end of the current Congress, and the eighth to retire from politics. The other 14 are seeking higher office.