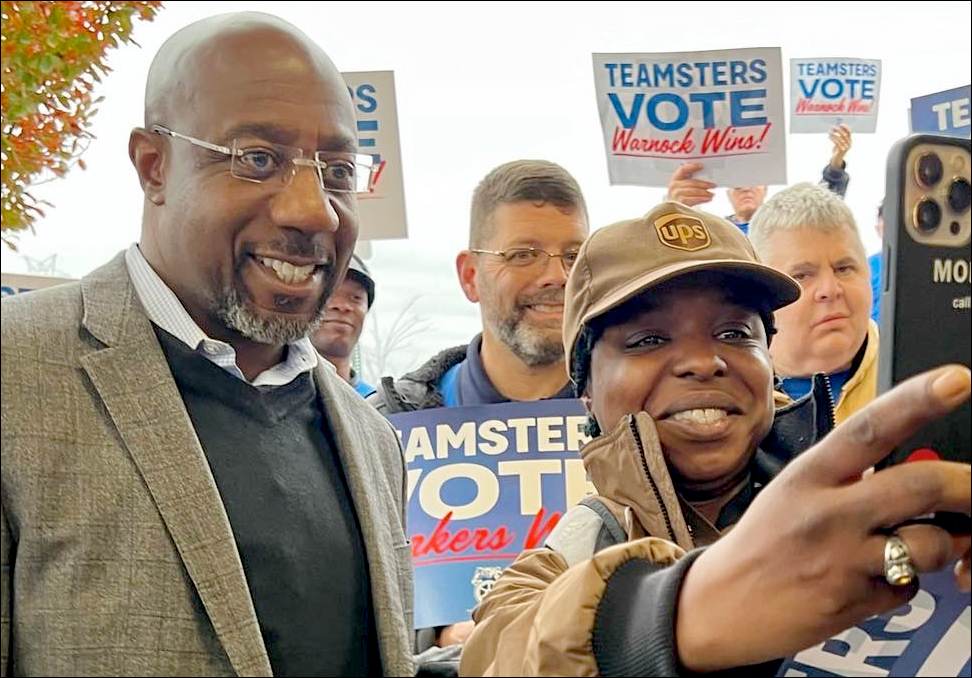 Georgia: Sen. Warnock Wins Re-Election — As predicted, Georgia Sen. Raphael Warnock (D) defeated GOP former professional football player Herschel Walker (R) last night in the Senate runoff, but the approximate 51-49 percent contest split was much closer than many prognosticators expected. The Warnock win gives the Democrats a 51-49 majority in the Senate, a net gain of one seat from the present 50-50 makeup. The outright majority will give the party at least one more vote than the Republicans on every Senate committee, and make it easier for the leadership to confirm administration appointments, including federal judges.

Turnout is one of the bigger stories, as the projected 3.6 million people voting in the runoff election is actually 200,000-plus individuals greater than those voting in the regular Senate contest back on Nov. 8. It is unprecedented for a runoff to draw more voters than a regular election, but such has apparently happened in this Peach State election.

Yesterday’s secondary election was necessitated under Georgia election law because neither Warnock nor Walker received majority support in November. Unlike in most states, an absolute majority is required to win a Georgia general election.

Sen. Warnock has now secured a full six-years in the Senate after winning the 2020 special election to fill the balance of then-Sen. Johnny Isakson’s (R) final term. Sen. Isakson resigned at the end of 2019 due to health reasons and then later passed away. Gov. Brian Kemp (R) then appointed businesswoman Kelly Loeffler (R) to fill the post until the 2020 special election of which Rev. Warnock won in that cycle’s subsequent runoff.

Florida: Sen. Rick Scott (R) to Seek Re-Election — Quelling political speculation that he would run for president in 2024, Sen. Rick Scott (R-FL) early this week made clear his intentions for the next election. Saying in a response to a question from radio host and national commentator Hugh Hewitt, Sen. Scott said, “I have no plans to run for president and I have a 100 percent plan to run for the US Senate [in 2024]. I’m running for re-election for senator from the great state of Florida.”

Speculation is also surfacing that outgoing US Rep. Stephanie Murphy (D-Winter Park) may challenge Sen. Scott. In a response to a reporter’s inquiry, Rep. Murphy didn’t close the door on such an option and pointed out that Florida is still not as “red” as the electorate voted in the 2022 election. Of the 11 Republican in-cycle seats for 2024, the Florida campaign could be the most competitive, but even here Sen. Scott must be rated a heavy early favorite for re-election.

Nebraska: Gov. Ricketts Will Apply for Senate Appointment — Nebraska junior Sen. Ben Sasse (R) has now set Jan. 8, 2023, as the date he will officially resign his elected position in order to become president of the University of Florida. Governor-elect Jim Pillen (R), who will appoint a replacement for Sen. Sasse, has asked individuals who want to be considered for the Senate appointment to apply before Dec. 23. One person who confirmed he will apply is outgoing Gov. Pete Ricketts (R).

In the open Republican gubernatorial primary back in May, Gov. Ricketts became actively involved and endorsed Pillen, a University of Nebraska Regent, over eight other Republican candidates including Trump endorsed businessman and rancher Charles Herbster. Pillen would win the Republican primary with four percentage-point margin and claimed the general election with just under 60 percent of the vote.

Though others will apply for the soon-to-be vacant Senate position, Gov. Ricketts is viewed as the clear favorite for the early January appointment. The new senator then will stand for election in 2024 to fill the unexpired portion of Sen. Sasse’s final term. The seat is next in-cycle for a full six-year term in 2026.

North Carolina: SCOTUS Hears Redistricting Case Today — The North Carolina partisan gerrymandering case that contains challenges to judicial authority over the redistricting process is before the US Supreme Court later today. North Carolina is challenging, among other points in the lawsuit, whether judges have the power to invalidate redistricting maps, since the US Constitution specifically gives re-mapping power to the state legislatures. While it is doubtful that the judicial panel will rule against judicial power, the legitimacy of the redistricting commissions that several states have adopted could be in question.

Along with the previously heard Alabama racial gerrymandering case, the Supreme Court is apparently prepared to issue landmark rulings on Voting Rights Act interpretation for the first time in decades. The rulings should end the inconsistent interpretations we have seen coming from various state judicial systems. Rulings on both the Alabama and North Carolina cases will be issued before the end of next June.