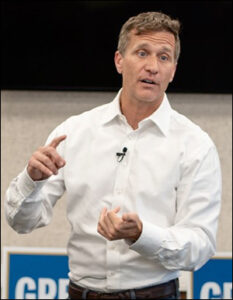 Missouri: New Polls Pleasing GOP Leaders — The hard-fought Missouri Republican primary is a week away, and three new late July polls are bringing sighs of relief to GOP leaders. It has long been believed that the Missouri race comes off the table if either Attorney General Eric Schmitt or US Rep. Vicky Hartzler (R-Harrisonville) wins the party nomination, but danger looms for the GOP if resigned, scandal-tainted Gov. Eric Greitens were to forge through a crowded field with plurality support.

In slightly different district configurations, Finstad must separately win the special general election against former Hormel Corporation CEO Jeffrey Ettinger (D), and the nomination for the regular term since the special general is being run concurrently with the regular statewide primary. With Munson competing in the regular election, the confusing scenario of having two different District 1 Republican winners could occur. With the only public post-special primary poll suggesting a dead heat between Finstad and Ettinger, so many mixed messages could yield a Democratic special election upset.

The GT results find Rep. Norcross topping Republican nominee Claire Gustafson, 49-44 percent, despite the fact that 83 percent of the respondents said they have not heard of the GOP nominee. To underscore matters, Rep. Norcross’ favorability index has dropped to 42:41 percent favorable to unfavorable. This contrasts with his 2020 re-election margin of 62-38 percent, similar to what President Biden recorded in the district. The FiveThirtyEight data organization rates NJ-1 as D+20, so seeing a close poll featuring an unknown Republican with little money from this district is surprising to say the least.