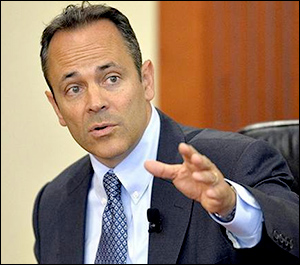 END_OF_DOCUMENT_TOKEN_TO_BE_REPLACED

The major institutions from both parties were wrong about the race. The RGA pulling out, only to return with a late $2 million ad buy, and the pollsters providing support for the analysis that Conway had the advantage were proved incorrect by a substantial margin.

About a week before the election both Survey USA and Western Kentucky University found Conway to be holding a 45-40 percent lead, almost the exact opposite of the final result. Vox Populi, which released the poll closest to the election, correctly found Bevin gaining momentum going into Election Day. Their last ballot test projected the candidates tied at 44 percent but the sample seemed to possess a slight Republican skew. The actual results, however, proved the Vox methodology, as it related to turnout model projection, sound.

In winning, Bevin is only the second Republican to become governor since World War II ended. The only other GOP winner was former Rep. Ernie Fletcher (R-KY-6), who held the governor’s mansion for one term after winning the 2003 election.

END_OF_DOCUMENT_TOKEN_TO_BE_REPLACED

Oct. 29, 2015 — The first Democratic debate is proving to be an early turning point for former Secretary of State Hillary Clinton. Prior to that event, Clinton was reeling and facing looming challenges ahead. Her strong performance may have at least partially contributed to Vice President Joe Biden’s decision to not enter the race. Her performance before the Benghazi Committee also helped her, and its momentum is a contributing factor to now launching her to a commanding lead in the latest Iowa polls.

Loras College, which released their Republican Iowa results earlier in the week, now reports a huge Clinton advantage over Vermont Sen. Bernie Sanders. According to this data (Oct. 19-22; 500 likely Iowa Democratic Caucus attenders) the former First Lady is now taking a massive 62-24 percent lead over Sanders among those questioned in the Iowa poll. This is quite a reversal of fortunes considering that the Vermont self-proclaimed socialist had been leading in Iowa polling before the debate.

END_OF_DOCUMENT_TOKEN_TO_BE_REPLACED

May 20, 2015 — Yesterday the highly contentious Blue Grass State Republican gubernatorial was decided … sort of. With no run-off system in Kentucky election law, the three major candidates who were in a virtual three-way tie in polls before the election wound up with about the same result after the election.

State Agriculture Secretary James Comer was viewed to be the early leader in the race, but accusations from former Louisville Metro Councilor Hal Heiner that Comer physically abused a girlfriend while in college effectively turned the race upside down. Charges and counter-charges flew between the two men for weeks, even including the appearance of the former girlfriend, and the after-effects weakened both candidates. And while the campaign turned nasty, businessman Matt Bevin, the wealthy investor who unsuccessfully challenged Sen. Mitch McConnell in last year’s Republican primary, crafted a positive strategy designed to propel him above the fray created between the other two. You may remember that in the 2014 race, polling showed Bevin running close to the veteran senator but, in the end, the nomination contest evolved into a McConnell landslide.

But this time, the businessman’s plan clearly worked, and it may well have carried him to the nomination. From more than 214,000 Republican votes cast last night, Bevin clings to an 83-vote lead with 100 percent of the precincts reporting. Each man attracted approximately 33 percent of the vote. Heiner, who placed third with 27 percent, conceded. Former state Supreme Court Justice Will Scott finished a distant fourth at seven percent.
END_OF_DOCUMENT_TOKEN_TO_BE_REPLACED

You may remember last week that Senate Republican Leader Mitch McConnell’s campaign manager launched a public attack on the Public Policy Polling survey research firm when they published numbers showing the senator with only a 37:55 percent favorability index. Though the PPP numbers showed his popularity at a low point for any incumbent senator, McConnell still maintained consistent 47-43 percent leads over actress Ashley Judd, Attorney General Jack Conway and Lt. Gov. Jerry Abramson. The latter two have already ruled out a 2014 senatorial run.

Yesterday, the senator’s campaign released their internal Voter/Consumer Research poll taken during the Dec. 10-13 period. Interestingly, though the McConnell team disparaged the PPP results, their own data projects him to be leading Judd by exactly the same 47-43 percent margin. What is vastly different, however, is the Minority Leader’s approval rate among the voters of his home state. While PPP forecast him in hopelessly upside down job approval territory, the Voter/Consumer Research poll posted him to a 51:40 percent favorable to unfavorable ratio.