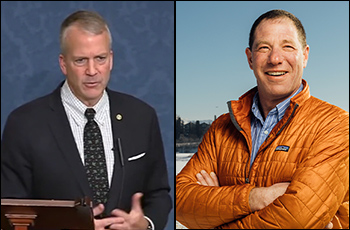 At this point, the latest survey from the Harstad Strategic Research firm (for the Gross campaign; Sept. 20-23; 602 likely Alaska voters, live interview) finds Dr. Gross pulling within one percentage point of Sen. Sullivan, 46-45 percent. This margin is not far from the 2014 victory spread Sullivan recorded (48-46 percent) when unseating then-Sen. Mark Begich (D).
END_OF_DOCUMENT_TOKEN_TO_BE_REPLACED

An internal Harstad Strategic Research poll for the Walsh campaign (released July 17; number of respondents not provided), gives the freshman congressman a 43-38 percent edge over the appointed senator. Though END_OF_DOCUMENT_TOKEN_TO_BE_REPLACED