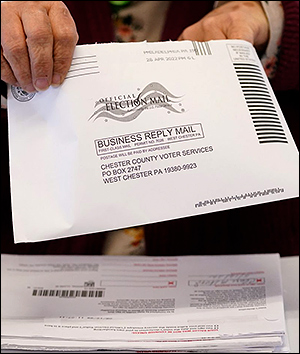 Pennsylvania: Related Court Ruling Could Add Votes — A three-judge federal panel sitting in the capital city of Harrisburg issued a ruling Friday on a Lehigh Valley case that relates to the current vote counting situation. The judicial action mandated the counting of mail ballots where no date appears on the carrier envelope. PA ballot procedure requires the voter to date the envelope before mailing. Immediately upon the ruling being announced, the Dave McCormick for Senate campaign sent a letter to all 67 county chief election officials reiterating the decision. The Dr. Mehmet Oz-Dave McCormick race is down to a lead of 1,070 votes for the doctor, suggesting that any new ballots added to the mix could theoretically help McCormick. It is unclear when we will see a final count publicized.

OR-5: Counting Stalled — Oregon’s 5th District ballot counting has ground to a halt because of a major malfunction in one of the district’s anchor areas, Clackamas County. Due to a reported bar code error on the printed ballots, election officials are having to record the votes of every ballot individually, punching a new ballot for each with the correct bar code. Hence, only 57 percent of the expected vote has been reported.

Rep. Kurt Schrader (D-Canby) is trailing badly, 60-40 percent in the Democratic primary, to former local city manager Jamie McLeod-Skinner. The congressman’s base is Clackamas County, but it appears, according to votes currently recorded there, that he won’t likely have enough support there to fully overcome his opponent’s large early advantage. If Schrader does lose, he will be the third House incumbent who fails to secure re-nomination, joining Reps. David McKinley (R-WV) and Madison Cawthorn (R-NC).

PA-12: State Rep Nearing Victory — One of the other Pennsylvania races that was too close to originally call was the open 12th District Democratic primary. Though she has not yet been officially projected the winner, state Rep. Summer Lee (D-Braddock) has increased her small lead to 737 votes of more than 94,000 ballots cast. Her main opponent is lobbyist Steve Irwin, and Lee’s lead may now be too wide for him to overcome. The eventual Democratic nominee becomes the prohibitive favorite in the general election and will replace retiring Rep. Mike Doyle (D-Pittsburgh) from the downtown Pittsburgh-anchored district.

Florida: Congressional Districts Still Unclear — Legal wrangling among judges imposing and then lifting and then re-imposing stay rulings regarding the Florida’s congressional map may be decided this week at the appellate court level. It is increasing possible, however, that the state Supreme Court will become the final arbiter should the Republicans’ motion to fast-track the maps to the high court be granted. Many argue that fast tracking the maps is the only way to give candidates adequate time to campaign in districts with definable boundaries prior to the Aug. 23 primary election. Most of the objections pertain to eliminating the majority black 5th District of Rep. Al Lawson (D-Tallahassee) that extends from Tallahassee to Jacksonville.

New York: Congressional Districts Enacted — Steuben County Supreme Court Judge Patrick McAllister approved the special master’s congressional maps with some changes, particularly in the Brooklyn area. The special master’s footprint helps Republicans to an extent, cutting their current delegation size from eight to five, which is one better than the Democratic map provided.

The new map does create at least five additional Democratic districts that will be competitive, and pairs Democrats Carolyn Maloney (D-Manhattan) and Jerry Nadler (D-Manhattan) into a new 12th District. Rep. Mondaire Jones (D-Westchester County) will move from his current 17th CD into a new west-side Manhattan 10th District where he will face former NYC Mayor Bill de Blasio and many others in a hotly contested primary. New York’s congressional and state Senate primaries are delayed until Aug. 23. The statewide contests and all other races will be decided in the previously scheduled June 28 primary.

END_OF_DOCUMENT_TOKEN_TO_BE_REPLACED

The Silver State of Nevada has become a key state in this presidential election. Part of the secondary group of states that will have a major impact in determining the eventual winner, its state election officials have released the early voting return numbers relating to party registration. No tabulation has begun, but knowing from whom the ballots come does tell a significant part of the story.

So far, the Democrats have a big lead in returned ballots. That’s not too surprising because the party traditionally tends to do better with this voting medium than Republicans. Additionally, Democrats have the better ground operation in Nevada as was evidenced in the 2010 Senate race when Majority Leader Harry Reid was re-elected in the face of a strong GOP head wind.

According to yesterday morning’s release, 210,484 ballots have been returned, with 48 percent of those coming from registered Democrats versus 35.5 percent from Republicans. In Democratic Clark County, registered Ds have returned 50 percent of the 146,337 early and absentee ballots as compared to 33 percent from Republicans. Despite the lopsided margin, Republicans are returning at a rate of two points above their Clark County registration figure. Democrats are even better at +4 percent.

Though the race here will be tight and many more ballots will be cast, the early numbers tell us that the Nevada Dems’ ground organization is meeting or exceeding their pre-election goals.