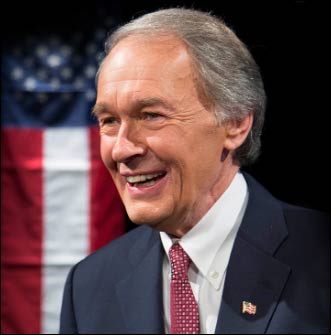 Rep. Kennedy is the grandson of the late Robert F. Kennedy, who actually never ran for office in Massachusetts. The elder Kennedy won his Senate seat from the state of New York. Ted Kennedy held his Massachusetts Senate seat after winning a special election in 1962 until his death in 2009.

In the Springfield congressional district, veteran Rep. Richard Neal, the chairman of the House Ways & Means Committee, secured re-nomination to a 17th term with a 59-41 percent victory over Holyoke Mayor Alex Morse. Neal captured a 22,379-vote lead from more than 124,179 votes cast with still 12 percent of the precincts outstanding.

This was another highly competitive primary contest but, in this instance, the incumbent became the survivor and did not join his eight congressional colleagues from around the country who fell in this season’s re-nomination campaigns.

The closest election of the night, and one that may not be decided for several days if not weeks after all of the absentee and post-election ballots are received and tabulated, comes in Rep. Kennedy’s open 4th District that begins in the Newton and Brookline areas and stretches past Taunton and down into Fall River.

Here, former Brookline Town Selectwoman Jesse Mermell has just a 105-vote lead over Newton City Councilman Jake Auchincloss within a primary turnout of what will likely exceed 150,000 voters stretched over nine names on the ballot. It was predicted that the contest would come down to a battle between these two candidates, but it was unclear that the ending would be so close.

Earlier, Auchincloss appeared to be the front-runner, but he is more conservative than the rest of the field. Therefore, outside progressive left groups began running ads against him with the hope that his obvious major opponent, Mermell, would be able to outdistance Auchincloss. At the end of this final count, whenever that may be, it may prove that their strategy provided Mermell with just enough votes to claim victory.