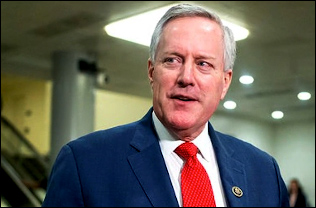 Because the regular primary has already occurred, Gov. Roy Cooper (D) is not obligated to call a special election to fill the balance of the current term, and early indications suggest that he will not. This means, like in CA-50, the 11th District will remain vacant for the balance of this year.

This will be the second time in this Congress that a North Carolina seat will be vacant for the better part of a year. Because of 2018 voter fraud accusations that led to charges, the 9th District Election Day winner was not certified, and the contest was finally decided in a special election that Rep. Dan Bishop (R-Charlotte) won.

Therefore, regardless of which of the three eligible candidates eventually wins the NC-11 seat in November, the representative-elect will not take the seat early because there will be no special election.

The Texas situation is a bit different, and timing will decide whether or not we see a special election in the northeast part of the Lone Star State. Rep. Ratcliffe will continue to serve in the House until he is confirmed, and early speculation suggests that he will win approval this time. His previous nomination was withdrawn.

As in California and North Carolina, the Texas primary was also held on Super Tuesday. Therefore, Rep. Ratcliffe is not only the sitting incumbent, but he is also the official 2020 Republican nominee in the 4th District. This changes the special election legal situation.

Aug. 21 becomes a key day in this scenario. Under Texas law, the ballots become frozen within 75 days of the election. If Ratcliffe is not confirmed before Aug. 21, then he will be on the November ballot even if he has resigned the seat to accept his new position.

If he is confirmed before Aug. 21 and immediately resigns, the Republican precinct committee members throughout the 4th District will then choose a nominee to replace Ratcliffe on the November ballot. The general election would then proceed according to the regular calendar.

In the former situation, that where Ratcliffe remains on the ballot even though he has resigned from Congress and is serving in a different position, the general election would proceed as normal, and if Ratcliffe is again re-elected, which would be likely in this safely Republican seat, an emergency special election would then be called to choose a new representative to serve the succeeding term.