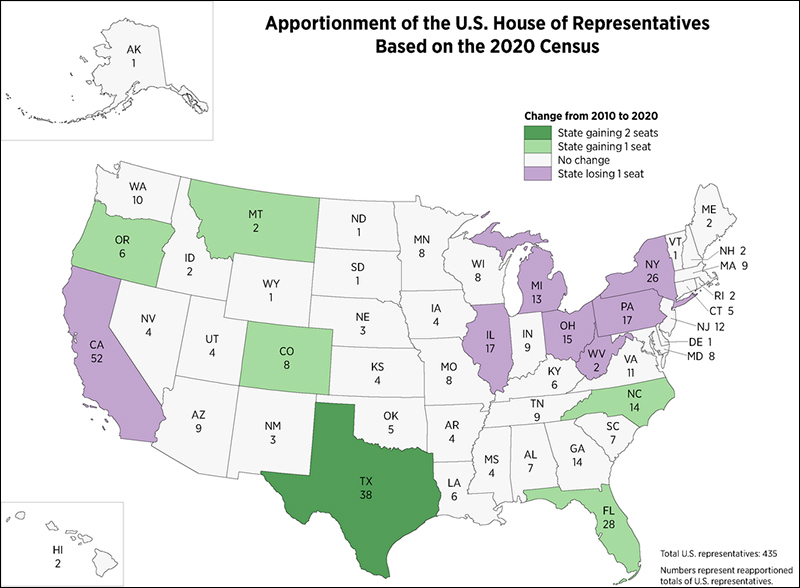 At the presidential level, the gaining states should deliver a net three for the GOP, based upon the 2020 national result. Republican Donald Trump carried Texas, Florida, Montana, and North Carolina, while Democrat Joe Biden won in Colorado and Oregon.

In the losing states, Democrats would lose one electoral vote apiece in California, Illinois, Michigan, New York, and Pennsylvania, while the GOP drops EVs in Ohio and West Virginia. The losing group also favors the Republicans by a net of three votes, meaning a net swing of six electoral votes if the state voting patterns were to remain constant for the 2024 presidential election.

A total of 20 states exceeded the national mean average of 7.4 percent growth. The median average is 6.1 percent. These numbers include the District of Columbia but not Puerto Rico. In Puerto Rico, severe population loss occurred, down 11.8 percent from the beginning of the decade. This is largely due to the damage the horrific 2017 Hurricane Maria inflicted that paralyzed the island and disabled significant infrastructure.

The states with the most robust growth rates are Utah (18.4 percent) and Idaho (17.3 percent). Those with more than 15 percent growth, in addition to the aforementioned, are Texas (15.9 percent), North Dakota (15.8 percent), and Nevada (15.0 percent). Despite the strong growth rates within this group, only Texas gained seats again underscoring that the apportionment formula makes it easier for the bigger states to both gain and lose CDs.

The apportionment release is four months overdue and considering previous announcements that the states won’t receive their data until Sept. 30 at the earliest, legislators and redistricting commission members will be under difficult time restraints to complete their map re-mapping tasks before the 2022 primary season begins. At the very least, the Texas and Illinois March primaries are very much in danger of being postponed and other early primary states could meet the same fate.

Now that apportionment is released, we will soon be able to better analyze the redistricting cycle and can do so in the coming days.