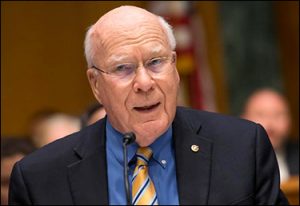 Vermont: Dean of Senate Makes Farewell Speech — Sen. Patrick Leahy (D-VT) was first elected in 1974 and went onto win seven more statewide elections. He is the third-longest serving senator in the history of the United States — in office for 48 years — and now is retiring as a historic figure in American politics. Sen. Leahy made his farewell speech on the Senate floor Tuesday in the waning days of his final term. The new dean of the Senate will be Sen. Chuck Grassley (R-IA) who was first elected in 1980. Two other top-10 senators in seniority, Richard Shelby (R-AL) and Jim Inhofe (R-OK) are also retiring when this Congress officially ends at the end of the year.

Speaker Race: McCarthy Vote Count Appearing Weak — More media attention is being paid to the impending House Speaker’s race to be settled when the new House convenes on Jan. 3, 2023. Earlier in the week, Speaker-Designate Kevin McCarthy (R-CA), who has the official Republican conference nomination for Speaker by virtue of winning a 188-31-5 vote in defeating Arizona Rep. Andy Biggs and others, released a list of his strongest supporters. For his part, Biggs pledges to challenge McCarthy in the January roll call vote signaling the beginning of the Congress.

McCarthy’s list of his strongest supporters, those who say they will vote for no other in what could become a lengthy process should the Speaker election progress through multiple rounds, is smaller than one would have otherwise surmised. The total only identified 54 such Republican members, not even a full quarter of the conference. Some believe this number signifies weakness as opposed to strength. In a Fox News article by Chad Pergram published Tuesday, the reports suggest the number of Republican members who could vote for someone else on the floor could be as high as 20, though only five have publicly expressed at least preliminary public opposition.

The last time a Speaker election went multiple rounds occurred in 1923. The voting will continue until some candidate receives majority support of the present and voting House members. No doubt, this will be the most interesting Speaker election we will have witnessed to date in the modern political era.

VA-4: Counting Didn’t Begin Until Yesterday — The Democrats held their “firehouse primary” Tuesday to choose a special election nominee to succeed the late Rep. Donald McEachin (D-Richmond), but considering we now regularly see the slow counting of votes during the present political period, the tabulation process did not begin until a day later.

State Sen. Jennifer McClellan (D-Richmond) is the party leadership’s choice and faces a challenge from controversial state Sen. Joseph Morrissey (D-Richmond), who was once convicted of having sexual relations with a minor (a girl who he later married), was summarily forced to resign his seat in the House of Delegates but then won it back as an Independent in the special election to elect a successor. He later resigned again and moved into a Richmond Senate district where he would then defeat a Democratic incumbent. Former state delegate Joe Preston and businessman Tavorice Marks also are in the race.

The Democratic winner will face the new Republican nominee, pastor Leon Benjamin who has twice been the GOP’s congressional candidate in this district. In a D+30 district according to the FiveThirtyEight data organization, the winner of this Democratic nomination has the clear inside track for the special election on Feb. 21.