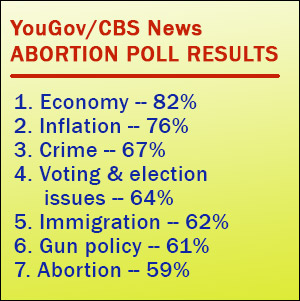 Though the abortion issue was highlighted as the central theme of the current poll, and the reported partisan segmentations only included Democrats and Republicans, thus omitting Independents; abortion as a voter turnout driver was still not at the top of the list.

Unexpectedly dropped from The Economist poll list are the issue areas of civil liberties, civil rights, criminal justice reform, education, foreign policy, health care, national security, and taxes/government spending. The most surprising omissions were education and health care, which are included in virtually every issue matrix poll within the entire polling universe.

Though the abortion issue was highlighted as the central theme of the current poll, and the reported partisan segmentations only included Democrats and Republicans thus omitting Independents, abortion as a voter turnout driver was still not at the top of the list.

According to this latest YouGov finding, 59 percent of the respondents rated abortion as “very important” (the other two choices given the respondents were “somewhat important” or “not too/not important”), but this ranked seventh on the list of one dozen tested topics. Again, topping the grouping with an 82 percent “very important” rating was the economy. Here are the results, listed in descending order of importance:

The best news for Republicans on this poll: the enthusiasm gap still looks to favor them, which is also a key factor in winning lower turnout midterm elections. According to the YouGov/CBS data, Republicans have a five-point lead over Democrats among those saying they will “definitely” vote in the upcoming midterm election, 79-74 percent.

Pennsylvania: A Suspected Outlier — Several polls have been released regarding the Pennsylvania Senate race during September, and all but one has shown Dr. Mehmet Oz (R) closing on Lt. Gov. John Fetterman (D).

The new Marist College poll (Sept. 19-22; 1,242 registered Pennsylvania voters; 1,043 likely Pennsylvania general election voters; live interview & online) sees Fetterman holding a 51-44 percent advantage, but the result appears to be an outlier. Five other pollsters, surveying during the Sept. 6-24 period find the Fetterman advantage to only be slightly more than three percentage points. On the other hand, 23 Pennsylvania Senate surveys have been released since the May primary and Fetterman has been posted to a lead in all.

Washington: Another Outlier — The Trafalgar Group (Sept. 21/-24; 1,091 likely Washington general election voters; multiple sampling techniques) just released data that no other pollster has even remotely found. According to this most recent Trafalgar result data, Sen. Patty Murray’s (D) lead over Republican Tiffany Smiley has dropped to just two percentage points, 49-47 percent. Though Trafalgar has proven itself very accurate in the elections since 2016, this poll appears to be an outlier.

In the most recent surveys conducted during the Sept. 6-15 period from Public Policy Polling and Elway Research, Sen. Murray holds an average lead of 11 percentage points. Still, Smiley’s effort is the strongest we’ve seen from a Washington statewide Republican candidate this century.

The result is not particularly surprising considering that Zinke had a close call in the Republican primary, edging former state Sen. Al Olszewski by just a 42-40 percent split. Zinke’s image is his problem, according to the Impact Research survey. His favorability index stands at a poor 39:54 percent positive to negative. Perhaps more troubling, 55 percent of the poll respondents agree that Zinke is “out for himself,” and 50 percent characterize him as “corrupt.” The new MT-1 is a must-win for the Republicans if they are to capture the House majority.