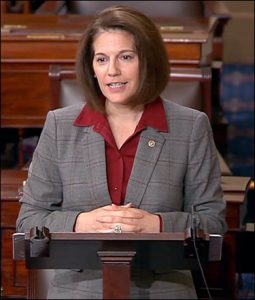 The danger point from this survey is that Sen. Cortez Masto is only in the lower 40s, suggesting clear vulnerability because she is quite far from obtaining majority support. The Nevada race will be one of the keys to determining the next Senate majority. It is becoming a must-win for Republicans if they are to have any hope of claiming chamber control in the next Congress.

Washington: Murray Expands Lead — For the better part of this year, Republican challenger Tiffany Smiley has been raising big money and running closer than expected to Sen. Patty Murray (D) in polling. A new Survey USA poll for KING-TV in Seattle sheds a different light on the race, which is closer to how the Washington electorate typically performs. The poll (July 6-10; 596 likely Washington state general election voters) finds Sen. Murray posting a 51-33 percent lead, clearly her best showing this year.

The Washington jungle primary is set for Aug. 2, but it is clear that both Sen. Murry and Smiley will advance to the general election. The primary result will tell us much more than polls do, since live voters will cast real votes on a ballot that emulates what they will see in the general election.

According to the DfP survey, de Blasio ranks last among the tested candidates at five percent, while Rep. Jones is only slightly ahead of him with seven percent support. The race leader, according to this data, is NYC Councilwoman Carlina Rivera, however even she only garners 17 percent. Close behind is state Assemblywoman Yuh-Line Niou (D-Manhattan). Though time remains before the Aug. 23 New York congressional primary, both Jones and de Blasio look to have quite uphill climb to make it to a point where he can seriously compete for the Democratic nomination. The new district is heavily Democratic, so whomever wins the primary on Aug. 23 will claim the seat in the November election.

Arizona: Democrat Captures Polling Lead — A Target Smart survey (June 28-30; 704 likely Arizona general election voters) of the Arizona electorate finds Democratic Secretary of State Katie Hobbs opening a lead beyond the polling margin of error against both Republican candidates who are vying for their party’s nomination.

Paired with Kari Lake, the former news anchor who former President Donald Trump supports and the candidate Democratic Party leaders are hoping to help engineer as Hobbs’ November opponent, the Sec of State leads 47-38 percent. If University of Arizona Regent Karrin Taylor Robson were to win the Republican primary, the general election draws tighter. In this scenario, Hobbs would take a 44-39 percent advantage. The race will begin to crystallize after the Aug. 2 state primary.

Nevada: Just as Tight as Senate Race — At the top of this report, we saw a new Emerson College survey that found Sen. Cortez Masto and former AG Laxalt to be falling into a statistical tie. The Emerson poll (July 7-10; 2,000 registered Nevada voters; interactive voice response system, online, & text) gives Democratic Gov. Steve Sisolak an almost identical 44-40 percent edge over Republican and Clark County Sheriff Joe Lombardo. As in the Senate race, this low number for incumbent Sisolak suggests we are again headed for a very tight general election, a typical state of affairs in Nevada, but this time featuring a campaign with two vulnerable Democratic incumbents.