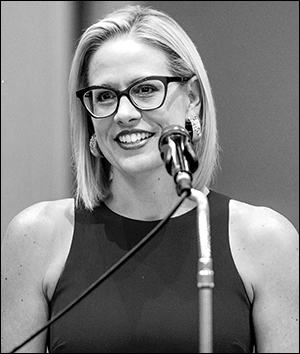 Arizona: Sinema Being Cut Off — With Sen. Kyrsten Sinema leaving the Democratic Party to become an Independent, reverberations already are being felt pertaining to her 2024 re-election campaign. Two of her consulting firms have left her, understanding that they would be eliminated from consideration for contracts within the Democratic Party establishment for servicing a candidate who is not a member of the party. According to a report from the Huffington Post, the data firm that controls the national Democratic Party voter file will now deny the Sinema campaign access to their services after Jan. 31.

These developments are not surprising since she will no longer be a Democrat, but further underscores that she will not caucus with the Democratic conference, a move that the Senate’s other two Independents, Bernie Sanders (VT) and Angus King (ME) continue to make. Therefore, the latter two are treated as Democratic incumbents in relation to consultant contracts and party resources.

Forfeiting these types of resources will leave Sen. Sinema on her own as she mounts a re-election effort. Obviously, she knew this would happen when making the decision to become an Independent, and these latest developments further suggest that we will see a true three-way 2024 race among Sinema and eventual Democratic and Republican nominees.

VA-4: Counting Begins, No Tabulations Released — Despite monumental societal technology improvements that we ubiquitously experience, vote counting continues to return to a bygone era. Election officials announced that counting more than 26,400 ballots cast in the VA-4 Democratic firehouse primary for the special election to replace the late Rep. Donald McEachin (D-Richmond) will take some days.

The local party reported that just five volunteers are handling the counting, and as of this writing, had completed processing about 4,000 ballots. No results were released, however. Some numbers may trickle out today or over the weekend.

The two leading candidates for the Democratic nomination, state Sens. Jennifer McClellan (D-Richmond) and Joseph Morrissey (D-Richmond), are expected to battle for the nomination victory among the four candidates on the ballot. The Democratic nominee will have the inside track toward winning the Feb. 21 special election. The Republican nominee is the party’s previous congressional candidate and local pastor Leon Benjamin. The FiveThirtyEight data organization rates the 4th District as D+30.

Gallup Survey: Republicans Better Viewed — The well-known Gallup research organization continually polls the country, testing and monitoring the electorate’s responses to issues of the day along with analyzing voting trends.

In a surprising post-election survey series result, considering the Republicans generally under-performed expectations in the November election, Gallup finds that a plurality of their latest national poll respondents (post-election poll; Nov. 9-12; 1,000 US adult respondents, part of the ongoing Gallup Poll Social Series project originally began in 2001) find the GOP in a slightly more favorable position than the Democratic Party.

According to this latest data, the Republican Party records a 42 percent favorable view within the sampling universe as compared to 39 percent who have a similar view of the Democratic Party. The number is the opposite of Gallup’s average since this question was first tested in 2011. During the overall time period between 2011 and the present, the Democrats hold a 44-40 percent average advantage on the favorability question.