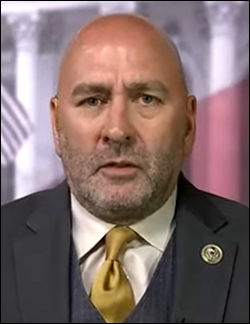 LA-3: Double Republican Race Brewing — We haven’t focused much on the Louisiana races this year largely because the state’s primary election runs concurrently with the general election. Using the jungle primary format, candidates can win outright in the one election if they command majority support. If all contenders fall below the 50 percent marker in a particular race, the top two finishers advance to a December runoff, this year scheduled for Dec. 10.

Former Rep. Charles Boustany (R), Rep. Clay Higgins’ (R-Lafayette) GOP predecessor in the 3rd District seat, on Monday endorsed another Republican in the jungle format, prosecutor Holden Hoggatt. The move suggests we could see a late developing double-Republican race in Cajun Country, though Rep. Higgins, a former police captain who came to fame for his tough law enforcement videos, largely has become a folk hero in southern Louisiana and will be difficult to dislodge. Rep. Higgins has averaged 62 percent of the vote in his two re-election campaigns, winning both contests outright.

The Conole campaign released countering data on Monday, but their Global Strategy Group survey was commissioned considerably earlier (Sept. 15-19; 400 likely NY-22 general election voters) than the Siena College poll and only showed a slight 43-42 percent edge for the Democratic nominee. Thus, releasing a dated study with the candidate having such a small advantage suggests that the Siena data is likely a more realistic depiction of the current political situation. The new Syracuse-anchored NY-22 is a politically marginal open seat from which Republican Rep. John Katko is retiring.

Siena College, polling in the period before the aforementioned (Sept. 16-25; 655 likely New York general election voters) projected a much larger Hochul lead, 54-37 percent. It will be interesting to see if this latest trend proves to be an anomaly or the beginning of a directional change within the general election contest.

Nebraska: Closer Than Expected — The open Nebraska governor’s race has not attracted much attention in the general election cycle, but a new Data Targeting poll projects the race between University of Nebraska Regent Jim Pillen (R) and state Sen. Carol Blood (D-Bellevue) is closer than most observers might have expected. The DT survey (Sept. 29-28; 1,340 likely Nebraska general election voters; interactive voice response system & text) shows Pillen holding a 48-41 percent advantage over Sen. Blood. It is likely the ultimate spread will favor the Republican nominee to a greater degree, but this first glimpse into the race suggests that both campaigns will pick up the pace as we move closer to election day. Early voting in the Cornhusker State began yesterday.

The bottom line is that this race is close and either candidate has a strong chance to win. Turnout will be the key factor. In the primary, Republican turnout was up an astonishing 110 percent when compared to the 2018 midterm election. Democratic participation was also up, but with a much smaller 29 percent increase.

Nevada: The Democrats’ “Three-fer” Commercials — The Democratic Congressional Campaign Committee (DCCC) has a new interesting media message approach for the three Nevada congressional districts, each of which are covered through the Las Vegas Metropolitan Statistical Area (MSA). The tactic is to attack all three Republican candidates, businessman Mark Robertson, attorney April Becker, and insurance agency owner Sam Peters, with one message. Since the party is running a single-issue strategy about abortion, the ad hits all three candidates simultaneously for their pro-life stance.

The move is obviously an efficient use of their advertising dollars, but combining all three candidates in one message might be too convoluted for the voters to fully comprehend. The idea behind the spot is simply to associate all Republican congressional candidates with the pro-life position, thus making the message clearer.

Georgia: Gov. Kemp Expands Lead — The aforementioned Atlanta Journal-Constitution/ University of Georgia poll (see Georgia Senate above) also tested the state’s hot governor’s race. Gov. Brian Kemp (R) has been performing strongly in the polls since his landside 74-22 percent victory over former US Sen. David Perdue in the May Republican primary. The AJC/UGA numbers give the governor a 50-42 percent advantage beyond the polling margin of error over former state House Minority Leader and 2018 gubernatorial nominee Stacey Abrams (D).

Oregon: Minor Party Candidate Withdraws — One of the more interesting gubernatorial campaigns is found in the Beaver State of Oregon. The fact that Independent candidate Betsy Johnson, a former Democratic state senator, has a legitimate chance to win the race is what makes this campaign unique in the 2022 election cycle. Johnson has done better in fundraising than either Democratic nominee Tina Kotek, the former state House Speaker, and Republican former state House Minority Leader Catherine Drazan. She is also competitive with the two major party nominees in the various statewide polls that have been conducted.

Thus, with Green Party nominee Nathalie Paravicini dropping out of the race and endorsing Ms. Kotek, as she did Tuesday, Paravicini’s action actually becomes significant. The race has the potential of splitting close to evenly among the three candidates, meaning each has a legitimate chance to win. Green Party candidate Paravicini’s endorsement, even with only a percentage point or two of support, could prove significant in the final count on election night by encouraging her supporters to instead use their votes to back Kotek.