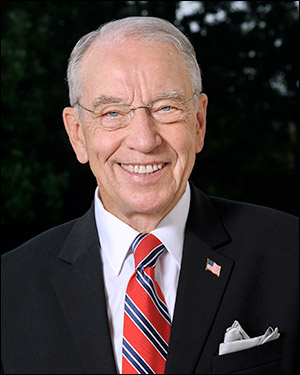 Sept. 28, 2021 — Saying he “ … has a lot more to do for Iowa,” seven-term Sen. Chuck Grassley (R) on Friday announced that he will run for an eighth term next year. Recently, the senator said he would make his decision about launching a 2022 campaign on or before Nov. 1.

Sen. Grassley was one of three Republican incumbents who had not declared their re-election intentions. Sens. Ron Johnson (R-WI) and John Thune (R-SD) both say they will announce their decisions later in the fall. All 14 in-cycle Democrats are on an active re-election track.

Sen. Grassley is already the longest-serving Iowa US senator, originally elected on the same night when Ronald Reagan won the presidency in 1980. He has been an elected official since winning his first term in the state House of Representatives back in 1958. Should he win the coming election and complete his next term, he will have served 70 consecutive years as a public official, counting his time in the state legislature, US House and Senate.

It appears the senator is in strong political shape for the coming campaign. At this point, he faces only state Sen. Jim Carlin (R-Sioux City) in the Republican primary.

When he entered the race, it was speculated that Carlin was attempting to get a head start on an open Republican primary in anticipation that the 88-year-old senator would announce his retirement. He indicated that he planned to stay in the race regardless of Sen. Grassley’s intentions, but now that the incumbent’s campaign is official we will see if Carlin continues in his long shot statewide effort.

The leading Democrat is former Congresswoman Abby Finkenauer. She served two terms in the state House of Representatives, and then defeated incumbent US Rep. Rod Blum (R) in the 2018 election. She would subsequently lose her first re-election bid to current Congresswoman Ashley Hinson (R-Marion/Cedar Rapids). Now, like so many others who have recently lost elections, Finkenauer is attempting to run for a higher office.