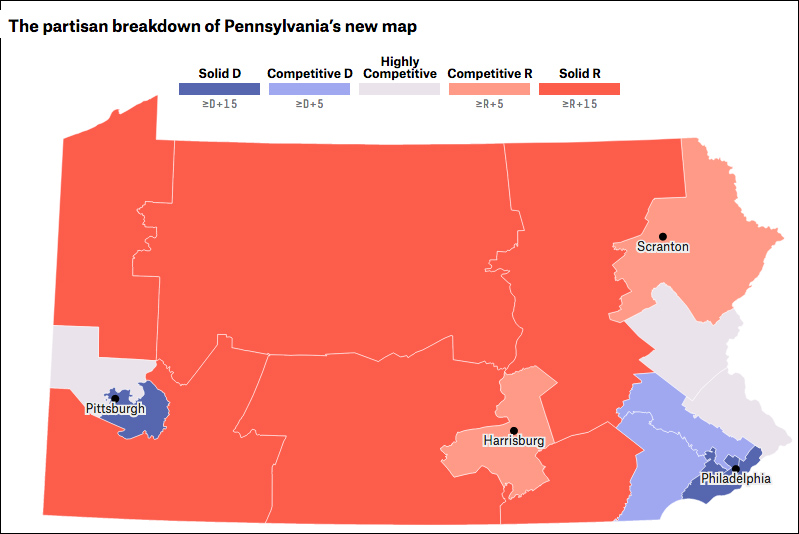 On the other hand, Dave’s Redistricting App records the Democratic percentage at 50.1 for the new PA-7 compared to the Republican 47.4. Rep. Cartwright sees his 8th District hold a 49.7 – 47.6 percent split in favor of the Democrats, but the FiveThirtyEight rating is R+8. Even what appears to be a fairly lofty figure to overcome, however, is still a tick down from the R+9 in the current district that Cartwright carried 52-48 percent in 2020.

The special three-judge North Carolina panel overseeing the Tar Heel State redistricting quickly struck down the legislature’s latest creation and instead surprisingly adopted a map with no legislative input. It is this latter plan that was sent to the state Supreme Court for final adoption. The new map clearly favors the Democrats and should allow them to gain at least one seat in the delegation, and possibly two.

This is a major blow to Republicans nationally in that North Carolina looked to be the only state where the party could gain multiple seats. Now, it is more likely the GOP will lose strength. This decision, if finally approved, will give the Democrats an advantage nationally when the redistricting process closes. The caveat with this court map, as with all interim judicial maps, is that it stands only for the succeeding next election and can be re-drawn next year in the new legislature.

The Democrats are likely gainers with this map, as mentioned above, but their victory path is not an easy one. The open 1st District (Rep. G.K. Butterfield-D, retiring) drops from a D+7 rating from FiveThirtyEight to D+5, meaning it has the potential of becoming competitive particularly in a midterm election.

The Dems receive a gift from the court with the drawing of new District 14, containing the western Charlotte suburbs and at least one more county to the west. The new District 14 carries a D+11 rating from FiveThirtyEight. Under the legislature’s rejected second map, this seat would have been virtually dead even in terms of past voting trends.

Under the court map, District 13, that encompasses the southern part of Wake County and part of Republican Johnston County becomes a toss-up seat, carrying a R+3 rating from FiveThirtyEight. The Dave’s Redistricting App staff members have not yet released their numbers for this court version of the NC congressional map, hence the reliance on the former’s numbers.

With the latest draw, the two members getting the biggest breaks are Reps. Kathy Manning (D-Greensboro) and David Rouzer (R-Wilmington). Rep. Manning was paired in the first map under a plan that would have surely defeated her. In the second map, she was more competitive, but a decided underdog. The court restored her Greensboro-anchored district and added northern Virginia border counties, thus making the seat D+9. Still, this is a far cry from her current D+21 score, in which she recorded a 62-38 percent victory in 2020.

Also under the current map, Rep. Rouzer’s 7th CD rated as R+21, which gave him a 60-40 percent re-election margin in his last election. The court draw restores him to a R+16 seat, after seeing all of his advantage dissipate under the second legislature’s map. That version would have left Rep. Rouzer with a choice of two regional toss-up districts in which he could have sought re-election.