Feb. 9, 2018 — The 2018 Florida Senate race is on the cusp of becoming one of the top political campaigns in the country, but polling has been scarce … until yesterday. 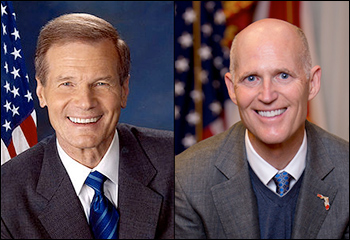 Three different pollsters released data from their recent Florida electorate surveys, each testing the impending contest between Sen. Bill Nelson (D) and Gov. Rick Scott (R). Though the governor has not announced his candidacy, a loosely affiliated Super PAC has been spending heavily touting his accomplishments through various substantial statewide media buys. Since no other Republican candidate is even contemplating running, few doubt that the governor will make the race.

That being said, Florida Atlantic University, the University of North Florida, and Mason-Dixon Polling & Strategy all released surveys this week. Though each arrived at different ballot test results, and all three have some methodological flaws, it is clear that the overall conclusion tells us that the Florida campaign is already in the toss-up realm.

The FAU poll (Feb. 1-4; 750 registered Florida voters; 375 on-line, 375 via automated telephone system) returns the most surprising result. According to their sampling universe, Gov. Scott has a 10-point, 44-34 percent lead over Sen. Nelson. This seems far-fetched, especially in comparison with the two succeeding polls taken during the same time frame. Additionally, the polling sample contains too many Independents, and is a bit low for both Democrats and Republicans. This makes the ballot test response even more curious and suspect.

END_OF_DOCUMENT_TOKEN_TO_BE_REPLACED

Though we haven’t seen numbers here for months, the FAU data shows little has changed since the last surveys were released. Accordingly, Sen. Nelson tops Gov. Scott by only a 42-40 percent margin, meaning a virtual tie. Close races are nothing new in Florida, as we all know, so the polling results seem plausible.

Gov. Scott is not yet an official Senate candidate and repeatedly says he is no hurry to make a decision. But, the Florida political establishment and other prospective candidates believe he is going to run, which explains why there is so little activity around a Democratic incumbent who could be vulnerable.

Through his first term, the governor had been routinely plagued with poor job approval ratings but still managed to win a close 2014 re-election battle against former governor and now Congressman Charlie Crist (D-St. Petersburg). Though the FAU poll did not publicize candidate favorability ratios, previous 2017 studies found the governor’s index significantly rebounding into positive territory. It is likely Gov. Scott is sustaining a positive image, since he continues run close to Sen. Nelson on the ballot test question.

END_OF_DOCUMENT_TOKEN_TO_BE_REPLACED

With the vote coming on Aug. 30, the South Florida Sun Sentinel newspaper and Florida Atlantic University together sponsored a survey of 400 likely Democratic primary voters in Florida’s 23rd Congressional District. The poll, administered by the Business and Economics Polling Initiative, suggests that Wasserman Schultz will likely win re-nomination, but she may find the final tally uncomfortably close.

According to the respondent group, polled during the Aug. 17-19 period, Rep. Wasserman Schultz leads Canova 50-40 percent, but delving into the poll suggests some interesting patterns that could lead to a much closer final result.

Despite Wasserman Schultz’s national problems, Democrats in her district, as evidenced by this 400-member polling sample, still view her relatively favorably. By a margin of 58:35 percent, these Democrats have a positive impression of the congresswoman. Canova scores in similar territory. The same group rated him 46:22 percent favorable to unfavorable.

END_OF_DOCUMENT_TOKEN_TO_BE_REPLACED

Nov. 23, 2015 — Reporters from several news publications, such as The Hill newspaper, along with various commentators are mis-reading the latest polls*. They’re trying to craft a premise that Donald Trump is again spiking, and that his improved status is directly related to the France massacre. But, the survey data are consistently revealing a much different point.

Considering that Trump ranges from between 23 and 38 percent support in all of these studies, taking into account their various sampling groups and methodological factors, isn’t much different than where he’s been standing for months. Trump continues to place first in most polls, but is far from the 50 percent majority figure he will need to capture the nomination.

The missed point is that these polls and other research conclusions are beginning to reveal a separation among the candidates. Most recent polling consistently shows that the top tier revolves around Trump, Dr. Ben Carson, Sen. Marco Rubio and Sen. Ted Cruz, with Jeb Bush falling into the second tier but remaining within striking distance of the upper echelon.

While true that the third and fourth place finishers in these studies sometimes do not touch double-digits, the standing order appears consistent throughout most of the survey research that now resides in the public sector.