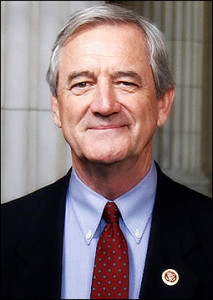 For decades, the 8th CD, known as the Iron Range District, has been anchored in the city of Duluth and St. Louis County. During a 36-year period, Nolan’s Democratic colleague, Jim Oberstar, would represent the area until his upset defeat in 2010. In that year, Republican Chip Cravaack shocked the political establishment with his 48-47 percent ouster of the veteran lawmaker. Two years later, Nolan would return the district to the Democratic column, unseating Rep. Cravaack, 54-45 percent.

Up until Friday, St. Louis County Commissioner Pete Stauber, a former professional hockey player, was becoming the consensus Republican candidate. Mills, despite coming frustratingly close to victory in the last two elections, declined to try a third time. Now, however, things may drastically change. The two-time congressional nominee said over the weekend that he would consider entering an open seat race. State House Speaker Kurt Daudt (R-Cambridge), who had been mentioned as a possible candidate in the new Senate special election sweepstakes, is also not ruling out jumping into this newly open House race.

For the Democrats, former FBI counter terrorism analyst Leah Phifer had already been challenging Rep. Nolan, and she is expected to remain in the race. State Sen. Tony Lourey (D-Kerrick) was quoted over the weekend as saying he is “seriously looking” at the congressional race. So is state Rep. Jason Metsa (D-Virginia) and former television news anchor Michelle Lee.

The Minnesota political party endorsing conventions play a large role in determining nominees, and the local county conventions to choose delegates to the district meeting, and then the state conclave are beginning in the next several weeks. Democrats will hold county meetings starting in mid-April; Republicans in early May. Official endorsements will come at the state conventions in June. If one or more candidates choose to take their nomination fight to a primary, that electoral contest will occur on Aug. 14.

We can expect the 8th District general election campaign to be in toss-up mode from now until Election Day. A Republican conversion here would go a long way to helping secure the GOP majority.