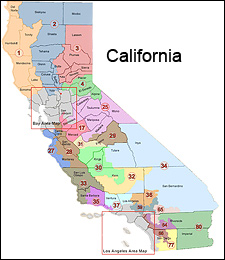 In the previous decade, Californians defeated only one US House incumbent in more than 500 campaigns. This, among other factors, led voters to adopt a new electoral system creating a citizens’ redistricting commission and sending the top two finishers in a jungle primary format – that is, all candidates appearing on the same ballot – to the general election regardless of political party affiliation.

The changes have achieved their intended effect of creating more competition. Last year 22 races featured a winner receiving less than 60% of the vote, and seven incumbents were defeated.

This year, competitive campaigns appear to be already forming in at least 14 districts, including four seats that will likely feature two members of the same party advancing to the general election.

Term-limited Assemblyman Dan Logue (R) has announced his challenge to Garamendi, the state’s former lieutenant governor. The competition level here should increase in comparison to 2012.

Denham clinched a second term in a much different district than the one he originally claimed in 2010, defeating former astronaut Jose Hernandez (D) who ran a strong campaign. This year, local businessman Michael Eggman (D) and attorney Mike Barkley (D) have entered the race. Denham should have an easier run under a mid-term turnout model.

Swalwell, then a Dublin city councilman, unseated veteran Rep. Pete Stark (D) in a close campaign last November and will likely face Democratic competition for re-election next year. State Senate Majority Leader Ellen Corbett (D), originally a 2012 congressional candidate who decided not to pursue the race when Stark announced that he would run again, says she will run in this cycle. House Minority Leader Nancy Pelosi, from the adjacent district, publicly supports Rep. Swalwell meaning that most, if not all, area Democratic leaders will likely follow suit.

Rep. Honda is attracting well-financed Democratic opposition in the person of Ro Khanna, a former Deputy Assistant Secretary of Commerce under President Obama. The latest FEC disclosure report shows Khanna to already have amassed more than $1.7 million in his campaign fund, meaning that he will run an active campaign despite early polling showing Honda holding a huge lead.

Rep. Capps defeated former Republican state senator and appointed Lt. Governor Abel Maldonado in what is now a very marginal district. This cycle she is attracting both Democrat and Republican opposition. Banker Paul Coyne Jr. (D) and actor Chris Mitchum (R), son of late actor Robert Mitchum, have declared their candidacies. The mid-term turnout model should give the eventual GOP nominee a boost.

Armed Services Committee chairman McKeon defeated podiatrist Lee Rogers last November, and the Democrat has already announced that he will try again in 2014. The Congressman is a decided favorite to win another term.

Back for a re-match is former state Sen. Tony Strickland (R), who ran an aggressive campaign last year in the open marginal Ventura County district. Strickland will need a major change in the turnout model if he is to unseat freshman Rep. Brownley, a former state assemblywoman.

Rep. Miller represents the most Democratic district of any Republican in the country. President Obama garnered 57 percent of the vote here in 2012. Interestingly, two Republicans qualified for the general election last year, edging out Redlands Mayor Pete Aguilar (D). Miller won’t have any Republican competition in 2014, but former Rep. Joe Baca (D-CA-43), who was defeated by fellow Democrat Gloria Negrete McLeod in the new 35th District, will attempt to return to Congress from the 31st. Aguilar is back for another try, as well. The general election will be highly competitive regardless of the combination of candidates who qualify.

Freshman Rep. Ruiz unseated veteran Congresswoman Mary Bono Mack (R) last November in a major upset. In this cycle, term-limited state Assemblyman Brian Nestande (R) has announced his congressional candidacy and will be a strong challenger. This race could become a toss-up well before Election Day 2014.

Freshman Rep. Takano, in his fourth bid for Congress, secured a strong general election victory over Riverside County Supervisor John Tavaglione (R), who many believed was the strongest candidate the Republicans could field. In the coming battle, Takano will likely face Riverside City Councilman Steve Adams (R), a former police officer. Takano will begin this race as a heavy favorite based upon his 2012 performance.

Although he’s representing what should be a reliable Republican seat, Calvert has already witnessed four candidates announcing against him. The most serious of these contenders is Riverside Republican County Supervisor Jeff Stone. A double-Republican general election here is a distinct possibility.

When five-term Rep. Campbell announced that he won’t seek re-election in 2014, it created a major Republican battle for the right to succeed him. State Sen. Mimi Walters (R) is viewed as the early leader. Orange County Supervisor John Moorlach (R) is also an announced candidate, as are two Republican businessmen. No Democrats have yet come forward. A double-Republican general election is likely.

The resignation of Democrat Mayor Bob Filner was thought to cost the Republicans their strongest challenger to freshman Rep. Scott Peters (D). But, such is not the case. Carl DeMaio, the GOP former city councilman who lost to Filner by four points says he will not enter the upcoming special mayoral election, instead choosing to remain in the congressional race. With DeMaio carrying the city precincts that overlap the 52nd over Filner, and considering that the congressional area outside San Diego is heavy Republican territory, DeMaio becomes a national challenger with one of the best opportunities to convert a Democratic seat.