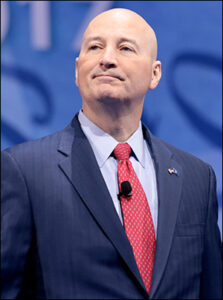 Nebraska: Gov. Pillen Tabs ex-Gov. Pete Ricketts for Vacant Senate Seat — Sen. Ben Sasse (R) has officially resigned his seat in order to assume his new duties as president of the University of Florida, and new Gov. Jim Pillen (R), as expected, chose former Gov. Pete Ricketts (R) as the interim replacement. Ricketts will serve until the next general election in 2024. The seat is next in-cycle for a six-year term in 2026.

Gov. Pillen wanted to pick a senator who would commit to serving a long while in order to build seniority for the state to compliment two-term Sen. Deb Fischer (R) who is seeking re-election in 2024. Therefore, Ricketts committed to running both in 2024 and 2026. Senate-Designate Ricketts will be sworn into office when the Senate next convenes on Jan. 23.

CA-30: House Race Already Rolling — California Rep. Katie Porter’s (D-Irvine) move to declare for the Senate even before incumbent Sen. Dianne Feinstein (D) announces her retirement has already set off a chain of reaction. Rep. Barbara Lee (D-Oakland) says she will announce once Sen. Feinstein makes her retirement public. Rep. Adam Schiff (D-Burbank) looks to be doing the same. In anticipation of the latter jumping into the Senate race, Los Angeles School Board member Nick Melvoin (D) announced yesterday that he will run for Schiff’s House seat.

Louisiana: Rep. Graves Considering Gov Race — Saying, “I think that the sentiment out there in the public for another candidate in this race is absolutely extraordinary,” Louisiana US Rep. Garret Graves (R-Baton Rouge) confirmed that he is still considering whether to run for governor later this year, and promises a decision in the next few days. The open gubernatorial field has changed drastically with both Sen. John Kennedy (R) and Lt. Gov. Billy Nungesser (R) declining to become candidates.

Graves was first elected to the House in 2018 and easily re-elected in 2020 and 2022 with 71 and 80 percent of the vote, respectively. He would not have to risk his congressional seat to run for governor in this odd-numbered year election. Attorney General Jeff Landry (R), state Treasurer John Schroder (R), and Department of Transportation Secretary Shawn Wilson (D) presently appear to be the leading contenders.

The candidate filing deadline is not until Aug. 10. The jungle primary is scheduled for Oct. 14. If no one receives majority support in the initial vote, the top two finishers will advance to a Nov. 18 runoff election. Gov. John Bel Edwards (D) is ineligible to seek a third term.

Mississippi: Elvis’s Cousin Announces for Governor — Mississippi Public Service Commissioner Brandon Presley (D), a second cousin to the late music legend Elvis Presley, announced that he will compete for the Democratic gubernatorial nomination in a quest to challenge Gov. Tate Reeves (R) later this year. Presley was elected to the Public Service Commission in 2007 after serving seven years as mayor of Nettleton, a town of approximately 2,000 residents. He is the first person to become an official 2023 opponent to Gov. Reeves. Secretary of State Michael Watson is a potential Republican primary challenger.

Candidate filing closes Feb. 1. The statewide primary is set for Aug. 8 with a runoff date on Aug. 29 for those races where no candidate achieves majority support in the initial vote. The general election is Nov. 7.