The House majority has been decided and leadership races are underway; still seven congressional contests remain uncalled. Today, we take a quick look at where each of these campaigns are leaning. 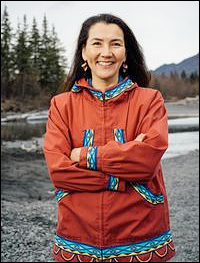 Alaska’s Mary Peltola (D) on track to be re-elected.

• AK-AL — According to the CNN Elections site, 81 percent of the Alaska vote has been recorded. A two-week post-election period to accept ballots from the wilderness has always been part of Alaska election law, so the elections take a long while to be finalized and certified. With the change in the state’s voting system beginning with this election, where the Ranked Choice Voting system has been added for races where no candidate receives majority support in the aggregate vote, the process is even longer.

In the at-large congressional, freshman Rep. Mary Peltola (D-Bethel), who won the August special election to replace the late Rep. Don Young (R), has a healthy lead and is approaching the majority plateau. She leads former Gov. Sarah Palin (R) and businessman Nick Begich III (R) by a 48.1 – 26.1 – 23.8 percent. Libertarian candidate Chris Bye holds the remaining 1.7 percent, and he will be the first eliminated assuming the campaign advances into the RCV round. At the end of the elongated process, expect Rep. Peltola to be re-elected.

The leader in this R+8 district that stretches from Sacramento down the California-Nevada border all the way into the southern part of the state is Assemblyman Kevin Kiley (R-Granite Bay/Sacramento). He holds a 52.4 – 47.6 percent lead over physician and Iraq War veteran Kermit Jones (D), a margin of 9,479 votes with 60 percent tabulated.

Kiley leads in six of the district’s nine counties, but one of his biggest advantages is in Placer County, the district’s largest and where only 42 percent of the vote is tabulated. With Kiley receiving 55.9 percent of this county’s votes to date, he has a big edge. Therefore, when more of this district is finally reporting under California’s very long counting system, expect Kiley to clinch this seat for the Republicans.

• CA-13 — In the redistricting-created open 13th CD that stretches from the Sacramento County border to Fresno, we see one of the closest uncalled races. Here, with 71 percent of the estimated vote counted and the lead seesawing back and forth between agri-businessman John Duarte (R) and state Assemblyman Adam Gray (D-Merced), the race is still anybody’s to win.

Currently, Duarte has re-captured a lead with a scant 827-vote lead. Gray, however, leads in three of the district’s five counties, but the margins are tight in each of the domains. This is one that could come down to the very last few votes. Going to a re-count after the total vote is finally presented is a likelihood.

• CA-22 — This Fresno-Bakersfield district is the most Democratic seat in the country, D+10 according to the FiveThirtyEight data organization, that sends a Republican to the House. At this point, with only 51 percent counted, Rep. David Valadao (R-Hanford) leads state Assemblyman Rudy Salas (D-Bakersfield) by 4,445 votes.

From the three counties, however, Salas leads in the largest, Kern, with 52.3 percent of the vote and only 43 percent of the county vote is tabulated. Therefore, Salas has room to grow. Rep. Valadao holds strong leads in the other two counties, which are smaller, and at least 90 percent has been recorded in each. This race will get closer, but as long as Valadao continues to hold his share in Kern County, he might have enough of a margin to hold on.

• CA-47 — Some entities have already projected Rep. Katie Porter (D-Irvine) as the winner over former state Assemblyman Scott Baugh (R). With a reported 8,250-vote lead in the Orange County seat, it is likely just a matter of time until she is officially declared the campaign’s victor.

• CO-3 — Yesterday was the deadline in Colorado to accept all post-election ballots including ones from overseas. The after-count has seen Rep. Lauren Boebert’s (R-Silt) lead cut in half, and now she has only a 551 vote edge over former Aspen City Councilman Adam Frisch (D). Depending upon how many votes remain to be counted, this election could still go either way. Expect the final totals to be released as early as today, and a re-count will likely be part of this campaign’s conclusion.

• CO-8 — Colorado’s new congressional district, CD-8, awarded through national reapportionment, was drawn as a 50-50 partisan seat and is performing as drawn. With the after-votes still being counted, Democratic state Rep. Yadira Caraveo (D-Eastlake) holds a 1,625 vote lead over state Sen. Barbara Kirkmeyer (R-Weld County). Though more of the votes are expected to come from Kirkmeyer’s home turf, the margin will likely reduce even further. This could be another re-count race, but it appears likely that Caraveo will be leading when the count finalizes.

In the end, the uncalled races should yield the Republicans two to three more seats, meaning their majority figure will be 220 or 221.