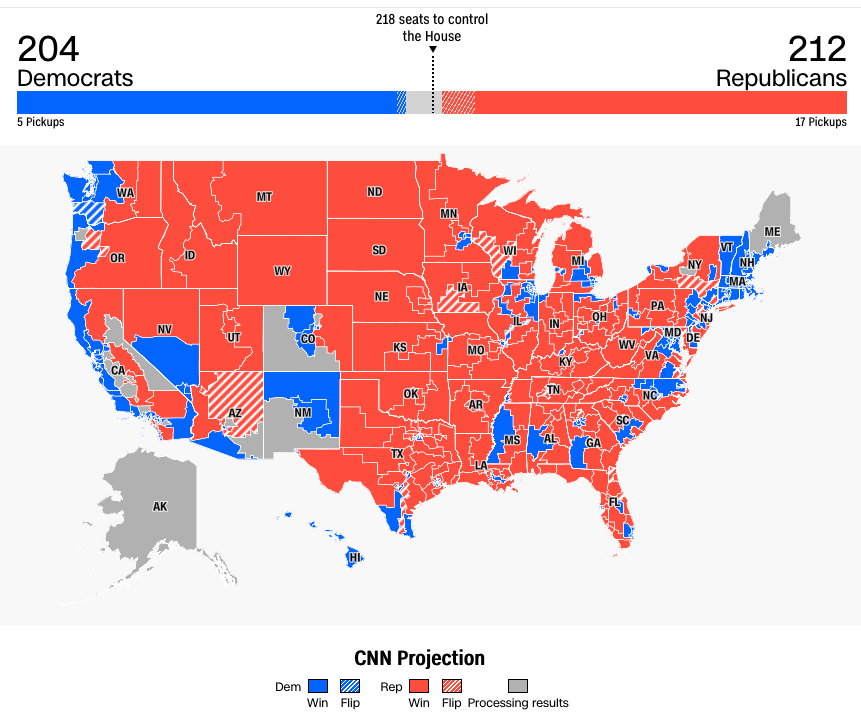 Now, just about a week beyond the 2022 election, each major party still has a chance of controlling the US House, while the Democrats, with late victories in Arizona and Nevada, have secured at least a 50-50 ostensible Senate majority when counting the vice president’s tie-breaking vote.

Senate: Majority Decided — Just one of the 35 Senate elections still remains undecided: the Georgia race that will head to a post-election runoff on Dec.6. Once the tight Arizona, Nevada, and Wisconsin races were called for incumbents Mark Kelly (D-AZ), Catherine Cortez Masto (D-NV), and Ron Johnson (R-WI) the majority was decided in favor of the Democrats.

A Warnock win would put the Senate balance of power at 51-49 with the Democrats in control and not needing the vice president to make a tie-breaking vote. A Walker win would leave the Senate without a true majority at 50-50, thus requiring Vice President Kamala Harris’ deciding call on straight party line votes.

The Alaska Senate race is also undecided, but the state’s new electoral system that sends four candidates to the general election won’t be final for another two weeks.

It is obvious that contest will winnow down to a battle between two Republicans, Sen. Lisa Murkowski and former Alaska Director of Administration Kelly Tshibaka. While Tshibaka leads the aggregate vote count, it has become clear that she and Sen. Murkowski will eventually advance into the Ranked Choice runoff.

Though Tshibaka is, and may remain, the vote leader, the RCV runoff system looks to favor Sen. Murkowski. Regardless of which woman is declared the victor when the lengthy process ends, the GOP will retain the Alaska Senate seat.

House: Majority Count Remains in Limbo — The House races are still very much undecided with 19 races uncalled. Considering that 10 of those races are in California and one in New York where it will likely take weeks to arrive at final totals, it could be quite some time until we know the ultimate outcome.

According to the CNN election site count, of the 19 uncalled races the Democrats lead in nine, Republicans eight, and two are pure toss-ups, both of which the GOP candidate has a slight count edge. Republicans, however, sitting at 212 called races in their favor versus 204 for the Democrats, need only six of the 19 to fall their way, while Democrats require 14 to claim a bare majority.

It appears the final margin may come down to just one or two seats. The GOP lead seems relatively secure in five of their eight advantage seats, which would give them 217, while the Democrats appear to have solid advantages in another seven of their nine, which puts them at 211.

Therefore, the Republican projection appears to lie in the 217-221 range, while the Democrats’ best-case scenario looks to be scoring a 218-217 slight majority. These predictions, however, are based upon rudimentary projections that could easily change once the actual votes are finally tabulated in all 19 outstanding campaigns.

The 36 governors’ races are also almost complete, with only Alaska and Arizona uncalled.

In returns that defied polling and thus favor the Democrats, Arizona Secretary of State Katie Hobbs (D) leads former news anchorwoman Kari Lake (R) in the governor’s race, and her advantage may be enough to clinch the office once the state works through its counting delays.

At this point, Hobbs holds a 50.5 – 49.5 percent lead with an estimated 93 percent of the vote counted. This translates into approximately 180,000 votes remaining to be tallied. To win, Lake would have to receive more than 56 percent of the outstanding vote to make up her 26,000-plus vote deficit, which is difficult.

Oregon, the site of perhaps the most interesting governor’s race because it featured a three-way battle, saw former state House Speaker Tina Kotek (D) prevail over ex-House Minority Leader Christine Drazan (R) and former state Sen. Betsy Johnson (I). Polling correctly suggested that Johnson had dropped well off the pace but also largely projected incorrectly that Drazan was positioned for a close upset win. In the end, the election broke 47-44-9 percent in Kotek’s favor with an estimated 93 percent of the all-mail vote counted.

Alaska Republican incumbent Mike Dunleavy looks to be in position to potentially clinch re-election outright, thus exceeding the 50 percent mark within the aggregate vote and avoiding a Ranked Choice Voting instant runoff. With ballots being allowed two weeks to report from the wilderness, it will be just before Thanksgiving when all of the Last Frontier races finally conclude.