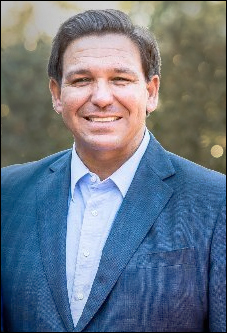 Florida — The Sunshine State voters also will choose their nominees today, and many important intra-party races will be decided.

Gov. DeSantis Well Ahead in Pre-Primary Poll — Florida voters will choose their general election nominees today, and a new Cherry Communications survey (conducted for the Florida Chamber of Commerce; Aug. 4-15; 608 likely Florida general election voters; live interview) projects Gov. Ron DeSantis (R) as well positioned for re-election. The CC poll results find the governor leading US Rep. Charlie Crist (D-St. Petersburg) 51-43 percent, while his advantage over state Agriculture Commissioner Nikki Fried is a similar 50-43 percent. This, in a state where Republicans traditionally under-poll. Crist, the former governor and multi-time statewide candidate who has run, and lost, under the Democratic, Republican, and Independent banners.

After recent polls found Florida Crist falling into an increasingly more competitive Democratic gubernatorial primary campaign with Fried, a new St. Pete Polls survey, on election eve, finds the congressman and former governor now ahead in a landslide. The St. Pete Polls survey (Aug. 20-21; 1,617 likely Florida Democratic primary voters; interactive voice response system) projects Rep. Crist to be holding a major 59-30 percent lead, far above any advantage he has recently posted. The Democratic winner will face Gov. DeSantis in November and will face an uphill battle against DeSantis in a campaign that will become a national event.

The Senate nomination contests in both parties, while leading to a competitive general election, are set. Sen. Marco Rubio (R) will be defending his seat against US Rep. Val Demings (D-Orlando), the former Orlando police chief. Recent polling has tightened, but voting history suggests that Sen. Rubio has at least a small lead.

A large number of US House races feature competitive nomination battles beginning in northwestern Florida’s 1st District where controversial Rep. Matt Gaetz (R-Ft. Walton Beach) is in a serious campaign with former FedEx executive Mark Lombardo. Gaetz’s highly publicized legal trouble is front and center in this race as well as Lombardo charging that the congressman’s national activities and profile have taken his attention away from serving the local district. This is certainly a race to watch, and a Lombardo upset is possible.

Florida gained a new seat in national reapportionment, and the state’s 15th District has been created. The district stretches from Lakeland into Tampa and leans Republican but we can expect some competition in the general election. Both parties feature five-person candidate fields. Polling suggests that former Secretary of State Laurel Lee has the inside track for the Republican nomination over state Sen. Kelli Stargel (R-Lakeland) and state Rep. Jackie Toledo (R-Tampa). The leading Democrat appears to be former news anchorman and two-time congressional nominee Alan Cohn.

Oklahoma: Close Result on Tap for Tonight in OK-2 — When Rep. Markwayne Mullin (R-Westville) opted to run for the Senate, his open eastern Oklahoma congressional district drew a crowded 14-candidate Republican field. In the June 28 regular primary for the strongest GOP district in the state (R+55 according to the FiveThirtyEight data organization), two candidates advanced into today’s runoff election even though they finished with less than 30 percent of the aggregate primary vote combined.

State Rep. Avery Frix (R-Muskogee) topped former state Sen. Josh Brecheen (R-Ada) by just 757 votes to secure the first runoff position. Brecheen then claimed the second slot over former Muskogee Police Chief Johnny Teehee by an even lesser 616-vote margin. In all, the top five candidates finished within 2,892 votes of each other.

Rep. Mullin has enjoyed large leads in his bid for the Senate in post-primary polling up until the latest release. Immediately after the June 28 primary election, where he easily topped former state House Speaker T.W. Shannon, 44-18 percent within a field of 12 candidates, Rep. Mullin was seeing average leads of 18 percentage points among three polls conducted from July 25 through Aug. 15.

The latest study, however, from the Sooner Poll, which is an add-on track from their Aug. 11-15 survey that ended on Aug. 17 (322 likely Oklahoma Republican runoff voters), shows the congressman’s statewide advantage at only 53-47 percent over Shannon. Tonight’s special runoff winner will advance into the general election against former US Rep. Kendra Horn (D).

This result is not particularly surprising. First, the Ohio electorate typically polls close and then one candidate significantly pulls away in the campaign’s last two weeks. Second, Gov. DeWine won his Republican primary with only 48.1 percent of the vote opposite three opponents suggesting clear weakness within his party’s base. Additionally, over one-third of DeWine voters say their support for him is “not so strong” or that they are only “leaning” in his direction. Expect the governor to soon use his strong financial advantage to put distance between he and Mayor Whaley.