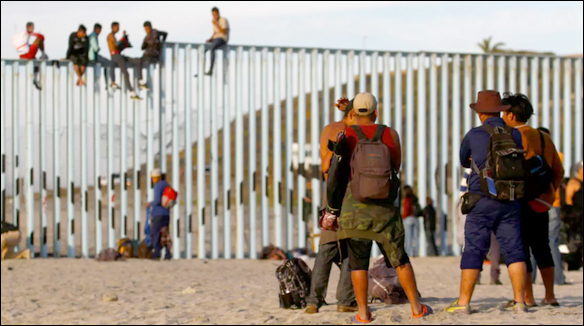 END_OF_DOCUMENT_TOKEN_TO_BE_REPLACED

Presidential job approval ratings can fluctuate widely based on a rather wide variety of factors. Among these are the status of the economy, whether the U.S. is at peace or war, the presence of real or suspected scandal, etc.

While President Barack Obama’s administration has been free of any significant scandal, the U.S. is currently engaged in somewhere between two and three wars, and is suffering from a painfully slow-growing economy and a 9.2 percent unemployment rate.

While the President’s approval rating has generally fluctuated in a relatively narrow band that has ranged from the mid-50s to the mid-40s for the last two years, the trend in recent weeks has become troubling for Democrats seeking office in 2012.

While Obama continues to receive broad support from African-Americans, his approval rating among Hispanics and whites has lingered at record lows in the past two weeks. Gallup noted that Obama’s approval rating among postgraduates and high-income Americans has seen a particularly steep decline since the late May-early June time period, which was the last time his average weekly job approval rating registered at least 50 percent.

At this stage of his presidency, Obama’s standing with Americans doesn’t compare very favorably with other post-WW II presidents. At the 940 days in office mark (Aug 20), here is how Obama compares to the other Presidents, since Harry S. Truman when polling of this type began:

Only Jimmy Carter fared worse than President Obama at this point in the term. The average for the 12 presidents after 940 days in office (857 for Ford) is 47.8%. Thus, Obama is almost eight percentage points below average at this point in time.

The low approval numbers do not mean that the President is doomed to lose his re-election campaign. History shows us that Presidents Nixon, Reagan, and Clinton were all below 50% approval but went on to win impressive re-election victories. In fact, historic landslides were even recorded for Nixon and Reagan. Conversely, two Presidents with some of the highest approval ratings, George H.W. and George W. Bush, both registering a strong 59% positive ranking at this commensurate time during their terms in office, did not fare as well in their re-election campaigns. As we know, George H.W. Bush was defeated for a second term, and his son won a close battle against a below average Democratic candidate.

The Gallup Organization released its presidential job approval ratings for late January, and then compared Barack Obama’s current scores to previous presidents at a commensurate time during their respective tenures in office. Eight former presidents were included on the comparison list, all of Mr. Obama’s modern-day predecessors with the exceptions of Presidents Lyndon Johnson and Gerald Ford. Neither of these men were elected to their first, or only (in the case of Ford), presidential term, hence they were purposely omitted. Vice Pres. Johnson assumed office after John F. Kennedy’s assassination and Vice Pres. Ford succeeded Richard Nixon upon his resignation.

Testing the elected presidents’ job approval ratings in January of their third year reveals no re-election prediction pattern. The chief executive with the best job approval score, George H. W. Bush at 75% in 1991, ironically went on to lose re-election less than two years later. The one with the lowest rating, Ronald Reagan at 36% in the beginning of 1983, would later win a 49-state landslide victory and enjoy historical ratings equal to the best American presidents. Kennedy, though his tragic murder prevented him from seeking re-election, was second highest at 74%. Dwight Eisenhower, who did win a comfortable re-election in 1956, posted a 70% positive score in the first month of 1955.

Since the 2010 election, President Obama’s approval ratings have increased slightly. According to the January Gallup data, he now stands at 49% job approval, with 42% disapproving. These numbers rank him sixth of the nine president’s tested. He is in the same category as Bill Clinton and Jimmy Carter, who both registered 47% in early 1995 and 1979, respectively. Clinton, of course, went on to win re-election, though without the benefit of gaining majority voter support, and Carter went down to one of the biggest landslide defeats in history.

The remaining two presidents on the list, George W. Bush, at 60% positive in January of 2003, and Richard Nixon, who posted 56% in early 1971, both were re-elected to a second term. Bush won a close re-election and served the entire term. Nixon won a landslide victory, but was forced to resign from office in disgrace in 1974.

Thus, the historical job approval ratings give us little in the way of predicting how Mr. Obama will fare in the 2012 presidential election. From a partisan standpoint, the president’s approval ratings among Democrats have been consistent throughout his tenure. Currently standing at 84%, he began with an 88% mark in February 2009 among voters within his own party. Republicans, not surprisingly, always scored him low, but he has now dropped into the teens among this subset of the electorate. He began with 41% approval ratings among GOP voters, but currently scores only 14% positive. Perhaps most troubling for the president is his standing among Independents. Here, he is substantially weaker after serving two full years than when he first began. Within this group, Mr. Obama initially registered 62% favorable. Today, his score tumbles to 49%. It is within this latter subset that the President’s support will have to substantially grow if he is to win a strong re-election victory 21 months from now.