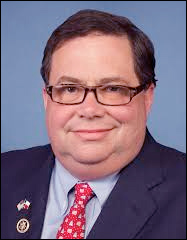 END_OF_DOCUMENT_TOKEN_TO_BE_REPLACED

March 20, 2018
— Veteran New York Rep. Louise Slaughter (D-Rochester) who, at 88 years of age was the oldest member of the House of Representatives, passed away on Friday after suffering a fall-related concussion earlier in the week. 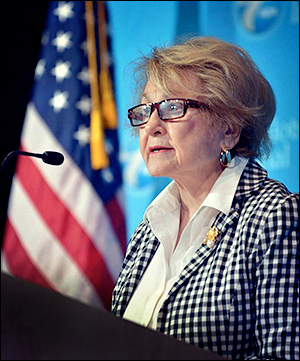 END_OF_DOCUMENT_TOKEN_TO_BE_REPLACED

Sen. Johnson has been commonly viewed as one of the more vulnerable Republicans standing for re-election in 2016. Wisconsin is a volatile political state, but historically has voted Democratic. Gov. Scott Walker’s (R) three consecutive wins and Johnson’s victory five years ago, however, suggest that the state is becoming highly competitive. In fact, since 2010, inclusive, Republicans have actually won four of the six Wisconsin statewide federal races. So, Feingold cannot expect an easy road back to the Senate.
END_OF_DOCUMENT_TOKEN_TO_BE_REPLACED 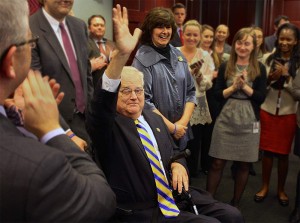 The 11th CD, formerly numbered 13, captures all of Staten Island and part of Brooklyn. The Staten Island portion represents two-thirds of the district’s population, and therefore candidates hailing from there have the upper hand. Previous Brooklyn Democratic candidates such as 2014 nominee Domenic Recchia, a former NYC councilman, fared poorly in general elections … END_OF_DOCUMENT_TOKEN_TO_BE_REPLACED

Also under New York election procedure, the local political parties will choose their respective nominee, meaning there will only be one election before the voting public. For a time, it looked like former three-term Staten Island Borough president James Molinaro might enter the race as a Conservative Party candidate, but the 83-year-old former local political leader is END_OF_DOCUMENT_TOKEN_TO_BE_REPLACED

Despite being under indictment for 20 counts of various financial felony charges, New York Rep. Michael Grimm (R-NY-11) was handily re-elected (53-41 percent) to a third term in office last month, but he soon may be forced to resign.

Reports emanating from New York City indicate that Grimm will plead guilty to one count of felony tax evasion at a hearing later today. He obviously hopes to avoid a prison term, though a sentence of between 24 and 30 months appears highly possible.

Clearly, if he goes to prison Rep. Grimm will be forced to resign his congressional office, and most likely the felony guilty plea will make it legally impossible for him to continue even if he isn’t incarcerated. To become a congressional candidate, one must legally qualify as an elector. Since he will lose his voting privileges upon conviction, Grimm will no longer qualify to serve in Congress.

A pending resignation means Gov. Andrew Cuomo (D) will schedule a special election to fill the subsequent vacancy. The 11th District comprises all of Staten Island and part of Brooklyn. Almost two-thirds of the district includes Staten Island, which gives us an indication as to why favorite son Grimm did so well in this district despite his legal problems. Ironically, despite his indictments becoming a major issue in the just-completed campaign, his 2014 performance was the strongest of his three winning efforts for the seat.
END_OF_DOCUMENT_TOKEN_TO_BE_REPLACED