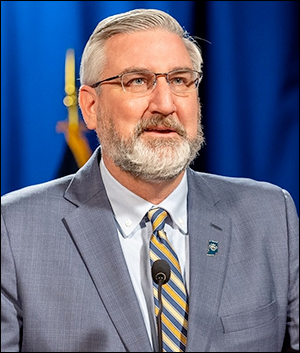 Indiana: Gov. Holcomb Leaves Door Open — Early political reports coming from the Hoosier State suggest that Gov. Eric Holcomb (R) will not pursue a 2024 US Senate bid when his tenure as governor comes to an end. Gov. Holcomb is ineligible to seek a third term.

When asked about running for the Senate this week on wishtv.com, however, Gov. Holcomb replied, “there’ll be time for me to think about the future in the future. But it would be next to irresponsible for me to take my eye off the job that I’ve got.”

This response suggests the Senate race door is not fully closed and will certainly remain an option for Holcomb as time moves forward. With universal statewide name identification and the ability to quickly raise large amounts money, Gov. Holcomb has the luxury of waiting to make a decision until he sees how an open Senate field develops. First-term Sen. Mike Braun (R) is a clearly preparing a run for governor, thus leaving his Senate seat open.

CA-22: Re-Match Already Building — California Rep. David Valadao (R-Hanford) is tied for representing the most Democratic seat in the country that sends a Republican to the US House. Long Island Rep-Elect Anthony D’Esposito (R-Hempstead) holds the other. The FiveThirtyEight data organization rates both Valadao’s CA-22 and Mr. D’Esposito’s NY-4 at D+10.

Despite the odds stacked against him, Rep. Valadao was able to post a 51.5 – 48.5 percent victory over state Assemblyman Rudy Salas (D-Bakersfield) in November, who was arguably the most difficult opponent Valadao faced in his five winning electoral campaigns. Yesterday, Salas, who risked his Assembly seat to run for Congress, filed a committee to seek a re-match in 2024. If he ultimately follows through and runs two years from now, this race will again become a top national Democratic conversion target.

Indiana: Sen. Braun Releases Gov Poll — Sen. Mike Braun (R) is clearly moving toward making a quick gubernatorial announcement after filing a state gubernatorial campaign committee last week. Reports suggest that Sen. Braun may make his formal declaration as early as next week. In preparation for launching a gubernatorial bid, he just released the results of an internal poll.

The study, from the Mark It Red research group (Nov. 18-22; sample size not released), finds Sen. Braun opening with a large Republican primary advantage in what will be an open race for governor. According to the survey results, Sen. Braun would lead Lt. Gov. Suzanne Crouch and venture capitalist Eric Doden, 47-10-5 percent, respectively.

North Carolina: Redistricting Case Could be Moot — The North Carolina partisan gerrymandering case that was heard before the US Supreme Court yesterday is a potential landmark case, but some North Carolina state political sources suggest the arguments may go by the proverbial wayside. The high court will rule before the end of June, but before that occurs, the new North Carolina legislature may draft new redistricting plans for the US House, state Senate, and state House of Representatives. Since a court map is only an interim plan, the legislature can replace it with a permanent draw at any time.

If this occurs as described, and new maps are enacted –- remember, in North Carolina, the governor has no veto power over redistricting legislation -– it is possible that the action could render the case before the Supreme Court as moot. If so, the issue of whether the Constitution views state legislatures as solely independent when handling redistricting could well go unanswered.