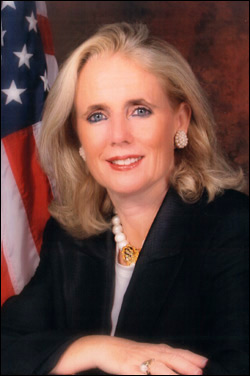 Debbie Dingell, in a posting on her Facebook page over the weekend, said she will not seek retiring Sen. Carl Levin’s (D-MI) open seat next year. She had been actively testing the waters for such a race ever since Levin made known his 2014 political intentions. Dingell is the wife of venerable Rep. John Dingell (D-MI-12) who, first elected in a 1955 special election, is the dean of the House of Representatives.

In an email Mr. Dingell sent to supporters relaying his wife’s statement, Debbie Dingell said in part, ” … when Carl Levin announced he would not seek reelection, those plans (working for Sen. Levin’s re-election and other Democrats’ such as her husband) changed. Close friends, complete strangers, political allies and business colleagues encouraged me to take a long, hard look at running for the Senate myself — and that’s what I have done.”

She then goes onto say, ” … but I think it is critical that Democrats unite behind one candidate for what will be a difficult and expensive race, and it’s one of the reasons I have concluded that now is not the time for me to run for the United States Senate. We have good candidates like Gary Peters already running, and a primary would be divisive at a time that cries out for unity. As someone who has spent much of my career working to bring people together, it just END_OF_DOCUMENT_TOKEN_TO_BE_REPLACED