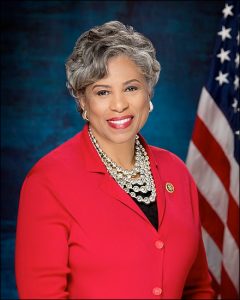 Jan. 7, 2022 — Four-term Michigan US Rep. Brenda Lawrence (D-Southfield) became the latest Democratic incumbent to announce her retirement. She is the 25th Dem to not seek re-election as compared to 11 Republicans.

Saying, “this is the right time to turn the page and spend more time with my family — my husband, daughter, son and granddaughter — and put them first,” Lawrence made official her decision not to seek a fifth term next year. She is 67 years old. Prior to her election to Congress, Lawrence served as Southfield’s mayor for 14 years. She is the only African American in the Michigan delegation and the lone Wolverine State Democrat to serve on the House Appropriations Committee.

It is speculated upon that the new Michigan map influenced her retirement decision, but Rep. Lawrence said she was confident of being able to be re-elected in the new 12th District. Though her home base of Southfield was included in MI-12, the cities of Dearborn, Westland, and the western part of Wayne County would have, for her, been foreign political turf.

In her closing comments to the Detroit Free Press newspaper, Rep. Lawrence said, “I’m incredibly grateful for the people of Michigan’s 14th Congressional District who have placed their trust in me — in me, a little Black girl from the east side of Detroit.”

The Lawrence decision greatly changes the Detroit area congressional campaigns. Immediately upon Rep. Lawrence announcing her retirement plans, neighboring Rep. Rashida Tlaib (D-Detroit) declared that she will seek re-election in the 12th District, saying that she currently represents more of this CD than the downtown Detroit-anchored MI-13. This leaves the 13th open and will create a major Democratic primary battle. CD-13 is a majority African American district and heavily Democratic, meaning that winning the party primary is tantamount to election in November.

A group of current and former Detroit state legislators announced Wednesday that they are filing a lawsuit against the Michigan Independent Citizens Redistricting Commission, saying the new congressional, state Senate, and state House of Representatives’ boundaries discriminate against black voters, and therefore violate the Voting Rights Act. If the lawsuit successfully overturns the Detroit district draws, new mapping instructions could be forced upon the commission before the 2022 election.