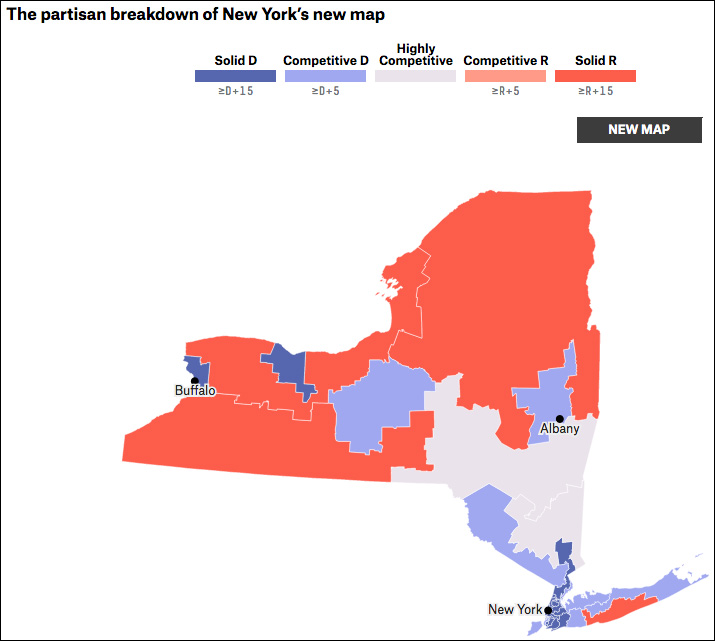 The recently enacted New York congressional map (go to FiveThirtyEight.com to see fully interactive map, or click on the map above.)

Feb. 10, 2022 — The recently enacted New York congressional map is one of the most gerrymandered in the country and designed to reduce the Republican contingent to just four of 26 seats. While Republicans will no doubt challenge the map in court, some of the moves, however, will prove justifiable.

Since the Democrats control the redistricting process in only four states, national pressure came upon the party’s legislative leaders in New York, Illinois, New Mexico, and Oregon to draw the maximum partisan maps. They did so in each case, but when such a map is constructed, invariably some of the majority seats are weakened to the point of being competitive in wave election years for the opposite party. Such appears to be the case with the New York lines.

To begin, the map drawers were able to cut the Republican contingent in half by executing several fundamental strategic moves.

First, they reduced Democratic strength (even with the current map or weaker) in 15 of the current 19 party held districts but still made the seats untouchable. Second, the remaining four Republican districts saw an increase in GOP loyalty. Third, the Republicans were forced to absorb the seat the state lost in national reapportionment, and the Dems were able to take advantage of three GOP members not seeking re-election: Reps. Lee Zeldin (R-Shirley; running for governor), Tom Reed (R-Corning; retiring) and John Katko (R-Syracuse; retiring).

Using the FiveThirtyEight statistical organization’s rating of each new district, we can draw conclusions about party performance in each of the new 26 CDs.

The collapsed seat is actually Rep. Tenney’s current 22nd District. It was justified combining the 22nd with Rep. Reed’s 23rd because those districts, located adjacent to one another, are the two lowest in population.

The current 22nd District was then combined with Rep. Katko’s current 24th to make the new open 22nd District, which resulted in a D+13 rating and a district again anchored in Syracuse. The voting trends in the new 22nd increase from the D+4 rating that the current 24th carries.

The new draw and Rep. Reed’s retirement allows Rep. Tenney to run in the new 23rd where she will likely have to win a competitive Republican primary, but would have a safe seat in the general election. The new 23rd, however, contains only 10 percent of her current constituency.

Rep. Jacobs’ current 27th District is then pushed northward from his Buffalo and Rochester outer suburbs district into a new safely Republican 24th CD that contains just under 60 percent of his current constituency. He, too, could face GOP primary opposition but will have a safe seat for the general election.

Democrats will have a strong chance of converting open District 1 on Long Island. This seat goes from a R+10 rating that Zeldin held to a D+6. Currently, with Suffolk County Legislators Bridget Fleming and Kara Hahn in the race, along with ex-Babylon Town Councilwoman Jackie Gordon who was the District 2 nominee in 2020, the Democrats have the stronger early contenders. The candidate filing deadline is not until April 7 for the June 28 primary, so the GOP has time to coalesce around a viable candidate of their own.