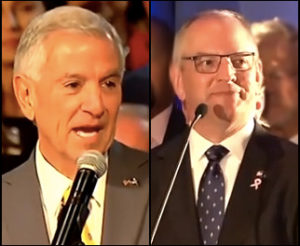 Once again, Republicans did not counter with a healthcare alternative as a contrast to the government program, which cost them. If this election related to the upcoming national campaign in any way it portends that Republicans cannot win support in the healthcare debate simply by advocating that the current programs end.

Kentucky Gov. Matt Bevin (R) officially conceded his election more than a week after Election Day, thus suspending any further recounts of the Nov. 5 result. Attorney General Andy Beshear (D) won the contest with a margin of just 5,086 votes from more than 1.4 million ballots cast, or less than one-half of one percentage point. Interestingly, even though losing the statewide vote, Gov. Bevin carried 96 of the state’s 120 counties. Prior to the 2015 election, Beshear’s father, Steve Beshear (D), was twice elected the state’s chief executive and served for eight years.