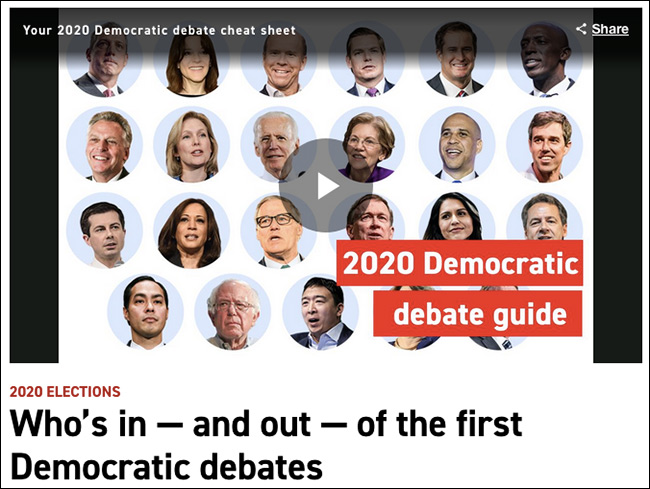 A poll they do recognize, however — and this one gets de Blasio into the debate — is an Ipsos/Reuters online survey that questioned both adults and registered voters. Even though de Blasio only made the one percent threshold under the adult question and not among the registered voters’ segment, the party leaders are recognizing that result and placing him ahead of Gov. Bullock.

The Politico writers correctly point out that Bullock’s position appears to be correct. The governor’s campaign spokespeople, who point out that he is the only Democratic presidential candidate to win a state that President Trump carried, contends that the party leaders changed the rules after they were announced and are discarding a stronger poll and replacing it with weaker data. The decision eliminates a small-state western governor and rewards the big city east coast mayor. It appears the DNC is simply playing to its political base, but the move is a curious one and looks to be unfair.

Furthermore, the DNC leaders have said they will not use the online Ipsos/Reuter’s data in future debates, choosing to go with the live interview surveys, thus giving further support that the I/R adult sample results are not as accurate as the other sanctioned surveys.

The final debate decisions will be made on June 12, but 13 candidates have clinched positions because they have both exceeded the polling and fundraising requirements. Nine, at this point, are the top polling candidates (averaging more than two percent) and five of these will be randomly placed on the first debate night, with the remaining four on the second.

This means Gov. Bullock, Rep. Seth Moulton (D-MA), Miramar Mayor Wayne Messam, and former Sen. Mike Gravel (D-AK) will be left on the sidelines. While time still remains until Wednesday’s deadline, it is unlikely that any of these four will make the cut because the tie-breaker is polling average.