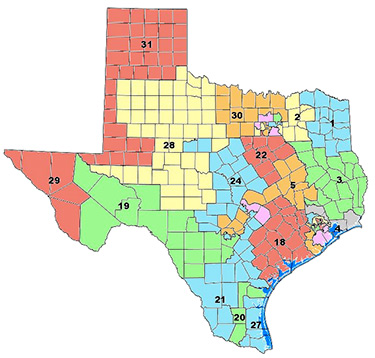 In Texas, 149 of the delegates come from districts, in this case the 31 state Senate districts. Another 79 are elected either at-large (49) or are in the PLEO category (30). This total group comprises the 228 first-ballot delegates that Texas will send to the 2020 Democratic National Convention in Milwaukee, the second largest delegation behind California (416).

The state also has 34 Super Delegates: 21 members of the Democratic National Committee and 13 from the US House of Representatives. Texas does not have a Democratic US senator, governor, or member of the Distinguished Party Leader category, thus limiting its total. Super Delegates, though not eligible to vote on the first ballot at the 2020 convention, are not bound under any state law, and therefore are free to vote of their own volition.

Under the nomination rules, a candidate must receive 15 percent of the statewide popular vote to qualify for delegate dispersion under the proportionality formula. If the Quinnipiac poll results were the actual vote, only Biden, O’Rourke, and Sanders would qualify for the statewide delegate split. They would get a commensurate share of the at-large and PLEO delegates that, in this case, would break 39 for Biden, 21 for O’Rourke, and 19 for Sanders.

In each of those, a new formula based upon the vote in the individual districts determines the delegate split for that particular state Senate domain. Therefore, even if a candidate does not reach the 15 percent plateau in the statewide count, he or she would win proportional delegates from each state Senate district where they exceed 15 percent of the particular district’s popular vote. Thus, individual candidates targeting certain districts could increase their delegate total or put them in the delegate mix irrespective of their statewide performance.

Since ex-Rep. O’Rourke represented the El Paso area, it would not be unusual to see him gain extra delegates from that particular region. The same would hold true for Castro who, before becoming Housing & Urban Development Secretary in the Obama Administration, was mayor of San Antonio.

While Biden may be leading in the polls, as you can see from the complicated delegate apportionment system, it won’t necessarily guarantee him runaway support within the all-important delegate count, from which the eventual nominee must reach a majority. Hence, this delegate distribution process becomes “the game within the game.”